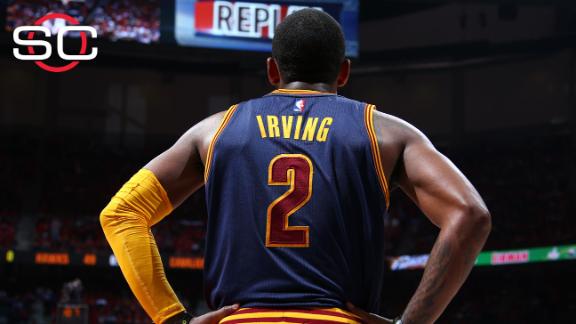 ATLANTA -- Cleveland Cavaliers point guard Kyrie Irving missed Game 2 of the Eastern Conference finals against the Atlanta Hawks on Friday night after he had his ailing left knee examined by Dr. James Andrews.

Irving had been listed as questionable after scoring only 10 points and sitting out the final eight minutes of the Cavaliers' victory in Game 1.

"[There was a] medical evaluation, and there was a decision on their part it was best to hold him out," Cavs coach David Blatt said.

Irving aggravated his left knee in the third quarter of Game 1 and said late Wednesday he was "pretty confident I'll go" in Game 2. Blatt had presented it as a question of pain tolerance Friday morning, but the team was clear that Irving was mandated to sit out Game 2 with its latest update.

"We're evaluating as we go forward," Blatt said, adding that he hopes Irving can return in the series.

Matthew Dellavedovastarted at point guard in Irving's place, with LeBron James expected to assume an expanded role handling the ball.

"Next man up," James said following a shootaround earlier Friday. "No excuses. No one's going to feel sorry for us no matter who's out."

Irving didn't attend the shootaround. The team announced about 90 minutes before the game that Cavaliers physician Dr. Richard Parker accompanied Irving on the visit to Andrews in Pensacola, Florida. Irving's examination by Andrews did not include an MRI, according to the Cavs.

The team announced that Irving is questionable for Sunday's Game 3 in Cleveland.

Irving's knee tendinitis surfaced in the second round against the Chicago Bulls as the All-Star point guard overcompensated from a strained right foot that he suffered in the first round against the Boston Celtics. A league source told ESPN.com that Irving's foot has responded well to treatment and now his main issue is the left knee.

Irving will attend Game 2 and undergo treatment in the arena during the contest. Irving, along with Parker and Andrews, agreed to a new treatment plan for his knee moving forward after Andrews offered a "different interpretation" of Irving's injury, a league source told ESPN.com.

Dellavedova played nearly 25 minutes against the Hawks but failed to score. He missed four attempts from beyond the 3-point arc and went 0-for-6 overall.