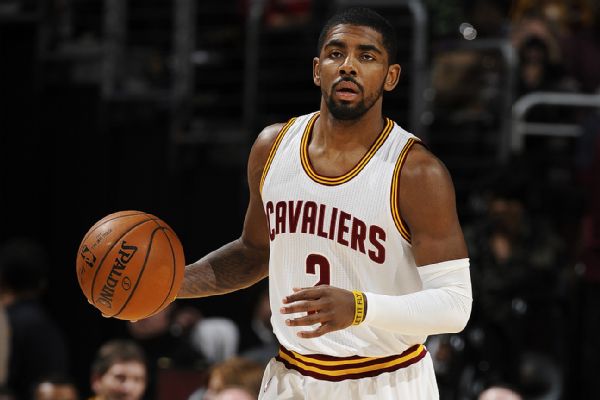 PHILADELPHIA -- Election season in the swing state of Pennsylvania got the best of theCleveland Cavaliers on Saturday, when a motorcade believed to be escorting Vice President Joe Biden from a Hillary Clinton rally in nearby Bucks County caused some of the team to be delayed on its way to its game against the 76ers.

After their bus was stopped for more than 20 minutes waiting for the motorcade to pass, Kyrie Irving, J.R. Smith and Iman Shumpert left it along with team security personnel and hopped in an Uber to finish their trip to the Wells Fargo Center.

They arrived approximately 65 minutes before tipoff.

Cavs general manager David Griffin told ESPN.com that the bus, which eventually got to the arena nearly simultaneously with the Uber, arrived about 35 minutes later than expected because of the VP's vehicles.

"My whole warm-up's jacked," Shumpert told a team staffer. "I'm going to have an attitude. Better not get fouled hard tonight."

NBA teams typically have an early bus that leaves the team hotel for the arena and is filled with either younger players looking to work on their games or veterans at the end of the bench who aren't expecting to play significant minutes. A second bus typically leaves the hotel 30 to 45 minutes later.

"I'm never taking the second bus again," Irving said as he hastily changed into his uniform in the locker room.

The 6-0 Cavs managed to stay unbeaten, but it wasn't easy, as they edged the winless Sixers 102-101. Irving was held to a season-low eight points on 3-of-17 shooting. Smith scored 11, and Shumpert had seven.

Despite Irving's shooting contributing to Cleveland coughing up an 18-point lead and then some, as it trailed by five with 3:54 remaining in the fourth quarter, Cavs coach Tyronn Lue complimented his point guard for how he persevered.

"Kyrie didn't have it going offensively. I think with the vice president being in town, him not being able to get shots up before the game might have thrown his rhythm off a little bit," Lue said. "But making two of the biggest defensive plays, taking a charge and deflection off [Sergio] Rodriguez's leg [was huge]."

Irving said his pregame shooting routine was cut from 20 minutes down to nine minutes because of the delay.

"A lot more shots in the gym are coming pretty soon, which I'm looking forward to," Irving said. "You come in shooting pretty well, feeling pretty confident, feel like I've got a routine going, and then it kind of gets messed up."

Smith, who shot 3-for-7 for the game, said he had to eschew his pregame stretching before he took practice shots and understood the struggles Irving experienced.

"It definitely has an effect," Smith said of the unexpected circuitous route to the arena. "Especially on somebody like Ky who is very routine-oriented. He sticks to his routine no matter what and he wasn't able to go out there and shoot the ball like he normally does in pregame. Normally it's me and him on the court and he goes through his routine and he wasn't able to do that, so I think that had a lot to do with him."
Related topics:
sportsespnphillycleveland cavaliersjoe bidenwells fargo centeriman shumpertkyrie irvingjr smithphiladelphia 76ersnba
Copyright © 2021 ESPN Internet Ventures. All rights reserved.
TOP STORIES
At least 3 dead, up to 99 missing in Florida building collapse
Security camera video shows moment of Surfside building collapse
Second Delco brother sentenced in Old City arson
Robbery suspect threatened to rape victim's mother: DA
More offseason talks expected on Simmons' future with 76ers: Sources
Nearly all COVID deaths in US are now among unvaccinated
Biden, bipartisan senators have deal on infrastructure
Show More
New Chick-fil-A opening in South Jersey, surprising local heroes
New York court suspends Rudy Giuliani's law license
What is critical race theory?
How computer chip shortage is plaguing car dealerships across region
Biden administration extends eviction moratorium for 30 days
More TOP STORIES News