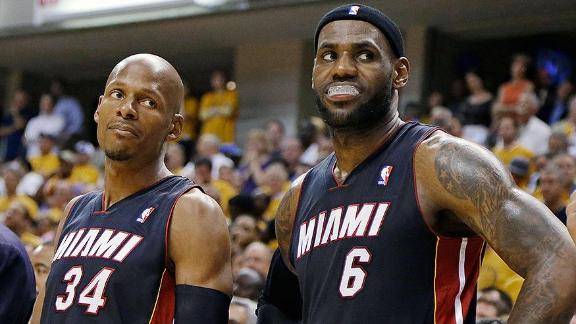 The cap-clearing maneuvers would primarily allow the Cavs to make a max offer to LeBron James, but Allen and/or Miller also could join Cleveland under team-friendly deals.

Allen and Miller are good friends with LeBron, having played with him for two and three seasons, respectively, with the Miami Heat.

Allen made $3.6 million last year. He likely would have to take a pay cut to join the Cavaliers should they land James and pay him the max salary, which is $20.7 million for next season. If the Cavs want to pay Allen and/or Miller more, they'd have to clear additional cap space.

Allen has spent the past two seasons as James' teammate with the Heat. He was said to be considering retirement after Miami's loss in the NBA Finals, but sources said he has since changed his mind and is leaning toward returning for a 19th season in the league.

Allen, who will turn 39 on July 20, played 73 games in the regular season and all 20 postseason games for the Heat. He averaged 9.3 points per game on 41 percent shooting in the playoffs.

After the Heat lost in Game 5 of the Finals, Allen said he felt good about his career and had a clear mind as he faced his summer options.

"One thing is for certain, to [make a decision] on my terms is the most important thing," Allen said. "Whether that is me retiring, staying here or going somewhere else, it will be on my terms. I've made it to this point, and I felt great that I have the choice to make it for myself."

Miller played with James in Miami from the 2010-11 season to 2012-13. He was waived last July as part of a financial move that saved the Heat as much as $17 million on future luxury-tax payments.

Miller ultimately signed with the Memphis Grizzlies, averaging 7.1 points and 1.3 3-pointers per game.

James previously has spoken of his close relationship with Miller. In May, he said not having Miller on this past year's team could be felt significantly.

"Yeah, he was just that stable guy," James told BleacherReport.com. "I mean, Mike, everything that he went through, both injuries and being in and out of the lineups, and not one day did he ever come to work with an 'I don't want to be here' attitude. Like never. And we all respected that. And for a guy like that who's done so much in his career, to come in with that mindset every day, we all saw that."

The James free-agent sweepstakes continued Wednesday with the star player and his agent, Rich Paul, expected to meet with Heat president Pat Riley in Las Vegas at 6 p.m. ET.

Earlier in the day, James appeared at the LeBron James Skills Academy, which is running Wednesday through Saturday in Las Vegas. He arrived at about 1:45 ET through a back entrance.

The King has arrived here at the LeBron James Skills Academy in Vegas. pic.twitter.com/wl4WVXMyPB