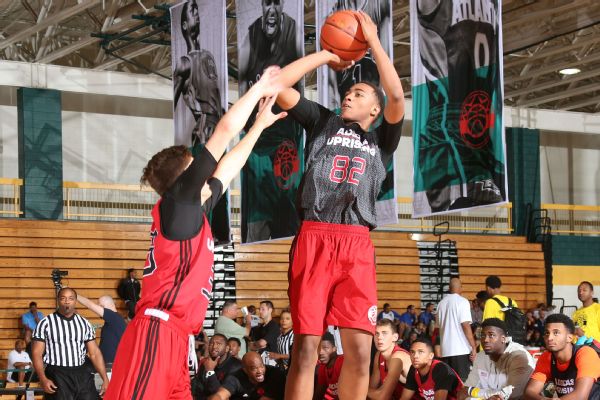 Four-star small forward Charles O'Bannon Jr., No. 34 in the ESPN 100, has decided to attend USC, selecting the Trojans over NC State, UCLA and UNLV.

"I felt really comfortable on campus, and it's close to home," O'Bannon told ESPN. "I like the environment, and I feel like I belong there. ... It feels like home."

O'Bannon (Bishop Gorman, Las Vegas) has been surrounded by basketball greatness his whole life. His father, Charles O'Bannon Sr., was a starter on UCLA's 1995 national championship team and went on to be a second-round pick in the 1997 NBA draft. His uncle Ed O'Bannon also was a star on the 1994-95 Bruins team and was the ninth overall pick in the 1995 NBA draft.

But Charles O'Bannon Jr. said neither relative put any pressure on him to be a Bruin.

"They want what's best for me and my future," O'Bannon said. "They totally support me going to USC."

USC assistant coach Jason Hart was the lead recruiter for the prized forward. The Los Angeles native built a strong relationship with O'Bannon, and coach Andy Enfield made him a priority.

"I bonded with the USC coaches the best, and their style of play fit me perfectly," O'Bannon said. "I believe I can help them on the perimeter. Coach Enfield is chilled and laid back, but he corrects you when you need it. I trust the coaches at USC."

Bishop Gorman has won five straight Nevada state championships, with O'Bannon a part of the past three titles. He owns an ideal frame to play on the wing. His skills are evolving, including his passing and ability to read the game. The next step is for him to improve his ballhandling.

USC is trending upward in the Pac-12, and this class will give the Trojans plenty of momentum for next season. O'Bannon will join Duke transfer Derryck Thornton, who is sitting out this season, as well as ESPN 100 prospect Jordan Usher and four-star prospect Victor Uyaelunmo.

O'Bannon is already working to add ESPN No. 6 Brandon McCoy to the Trojans.