WPVI
PHILADELPHIA (WPVI) -- The Chicago Bears' day did not get any better after the team left Lincoln Financial Field.

After being on the losing end of the Philadelphia Eagles' ninth straight win, the Bears had to wait a little longer to leave the City of Brotherly Love.

Their plane, United Airlines Flight 2539 traveling from Philadelphia to Chicago, was delayed to maintenance issues, the airlines stated.

The players, who suffered their eighth defeat of the season, had to wait four hours for a new plane.

Bears guard Kyle Long, brother of Eagles defensive end Chris Long, tweeted from the plane, "At least we get good WiFi on the ground, am I right?"

He then went on to describe his candy dilemma.

"I snagged two @SNICKERS bars when I first got on the plane, the first one. They're still in my pant pockets (just realized)... all melted... salvageable though," Long tweeted.

I snagged two @SNICKERS bars when I first got on the plane, the first one. They’re still in my pant pockets (just realized)... all melted... salvageable though https://t.co/iS0ijBBY77 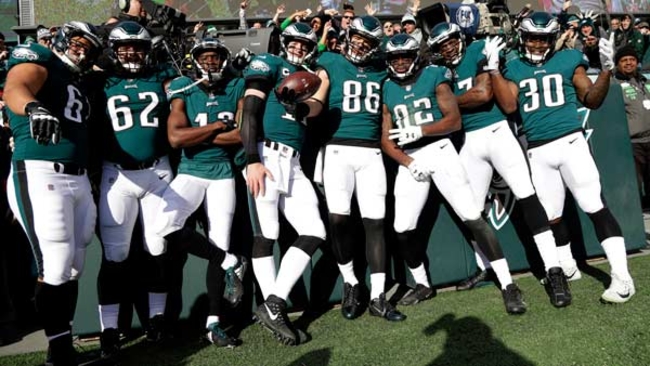