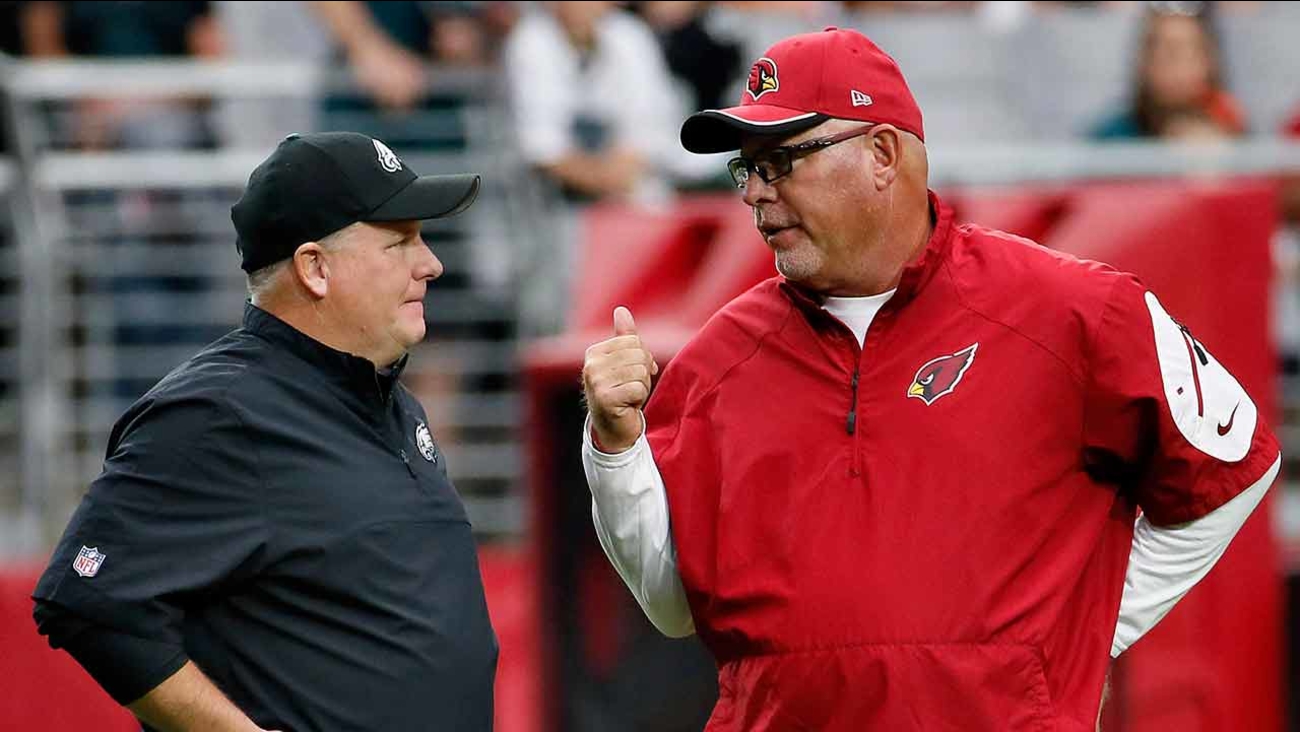 It worked out nicely for the Arizona Cardinals.

After firing Andy Reid, Eagles owner Jeffrey Lurie and then-general manager Howie Roseman interviewed a dozen candidates. Bruce Arians, who was The Associated Press NFL Coach of the Year in 2012 after filling in for Chuck Pagano and leading Indianapolis to the playoffs, was on their original list.

But the Eagles canceled the interview with Arians and lured Chip Kelly away from Oregon.

"I never got an answer other than 'thanks but no thanks,'" Arians said.

Arians grew up in Pennsylvania and coached Temple from 1983-88, so he was excited about possibly coming back to Philadelphia.

Instead, he ended up in Arizona and the Cardinals are better for it. He's 33-13 with three straight double-digit win seasons.

The Cardinals (11-2) are playing for home-field advantage while the Eagles (6-7) are locked in a three-way tie for first in the NFC East going into their game Sunday night.

Arians and Kelly don't have much in common. It's no surprise Arians doesn't care for Kelly's up-tempo offense and zone-read plays. He dismissed it as a "great college offense" in an interview in 2013 and mocked its use of quarterbacks in February.

"They hold up a card on the sideline, (the quarterback) kicks his foot and throws the ball," Arians said at the scouting combine "That ain't playing quarterback. There's no leadership involved there. Maybe on the bench."

Here are other things to watch for Sunday night:

SIMILAR QBS: Carson Palmer and Sam Bradford both won the Heisman Trophy. Both were No. 1 overall picks. Both have come back from a torn ACL twice. The comparisons end there. Palmer is clearly a franchise quarterback having one of his best seasons. Bradford has yet to prove he's the man, though he's playing better now that he's more comfortable in Philadelphia's offense.

"He's come into a completely different style of everything," Palmer said. "And he's really picked it up fast. I think every quarterback in the league would look at it and say 'man, he's done a great job in such a short time.'"

STOPPING FITZ: Larry Fitzgerald has dominated the Eagles throughout his career. He has 47 catches for 802 yards 11 TDs in seven games against Philadelphia. Defensive coordinator Billy Davis spent four years in Arizona and is quite familiar with Fitzgerald.

"To watch him work on practice is really what all NFL players should do at practice," Davis said.

BEATING THE BLITZ: The Cardinals blitz about 50 percent of their plays, so Bradford and the Eagles must be ready for the pressure. They faced plenty of heat from Rex Ryan's defense in a win over the Bills and Bradford had success against the blitz on important third-down conversions in the second half.

"You always have to prepare for blitz, but these last two opponents, the Bills and the Cardinals, are teams that are really going to come after you," Kelly said.

BACKS BY COMMITTEE: Four running backs carried the ball for the Eagles last week and it doesn't seem one guy will get the bulk of the work. DeMarco Murray, Ryan Mathews, Darren Sproles and Kenjon Barner are part of the rotation.

"We have what we think to be four really good running backs, so we want to use them all," offensive coordinator Pat Shurmur said. "I think if you put a really good player in the game, and he's fresher as you go, then you get a little bit more out of him."

KICKING GAME: Arizona's Chandler Catanzaro hit his second game-winner on four games last week against the Vikings, splitting the uprights on a 47-yarder with 1:23. Caleb Sturgis was 3 for 3 for the Eagles last week.