Chip Kelly on 49ers' QB situation: 'We're going to look at everything' 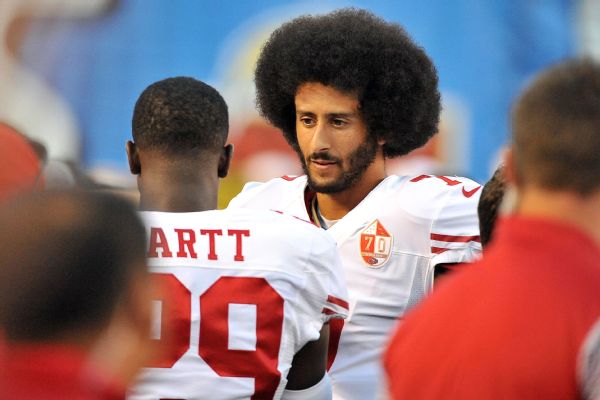 SANTA CLARA, Calif. -- After Thursday night's loss to the Arizona Cardinals, San Francisco 49ers coach Chip Kelly said he plans to examine "everything" in the coming days, including the potential for a change at quarterback from Blaine Gabbert to Colin Kaepernick.

"I don't think anybody played well on offense," Kelly said. "Nobody did."

The coach has stood by Gabbert as his starter for the first five weeks, but Kelly will put the quarterback position under the microscope in the next 10 days before the 49ers' game at Buffalo.

Kelly said Gabbert played his best game of the season last week against Dallas, but Kelly didn't have a similar opinion of Gabbert's performance in Thursday night's 33-21 loss. Gabbert finished 18-of-31 for 162 yards with one touchdown and two interceptions for a QBR of 47.9 and a passer rating of 56.1. Gabbert also absorbed seven sacks.

"It's extremely frustrating," Gabbert said. "I let this team and this organization down tonight and did not play good whatsoever, and that's on me. I had two crucial turnovers there that led to points for the Cardinals and that was the difference in the game right there. I got to do a better job protecting the football and leading this team to scoring more points and winning games."

Late in the third quarter, with cornerback Chris Davis being tended to with a knee injury, a large group of 49ers fans began loudly chanting, "We want Kaep." Former 49ers tackle Anthony Davis even took to Twitter to advocate a change to Kaepernick.

Kaepernick changed and quickly departed the Niners' locker room after the loss. He did not speak to reporters, but Gabbert was standing a few feet away in the auditorium where Kelly was answering questions about his job security.

Gabbert said he understood why Kelly would want to evaluate the position before the team's Oct. 16 game in Buffalo.

In the past, Kelly has refrained from considering a change in part because he didn't believe Kaepernick was in peak physical condition. Kaepernick spent most of the offseason recovering from shoulder, thumb and knee injuries and then had a setback during the preseason because of right shoulder fatigue.

Kelly has said he'd like to see Kaepernick get closer to his former 225-pound playing weight, believing that would potentially give him the chance to play at a high level -- similar to his success in 2012 and '13.

Kelly also confirmed that Gabbert has been better than Kaepernick in practice, though the coach acknowledged that hasn't carried over to games.

"Blaine has done a really nice job in practice, yes," Kelly said. "I would expect us to execute in practice now. It's a controlled environment; you're in a lot of trouble if you're not having any success in practice, either. I think that's what we have to make sure we can do is can we take it from the practice field to the game field, and we're not doing that right now on the offensive side of the ball."

Through the first five games, Gabbert ranks near the bottom of the NFL in yards per attempt, yards per game and passer rating. According to Elias Sports Bureau research, Gabbert fell to 9-31 in his career as a starter with Thursday night's loss, which tied him with Warren Moon for the second-worst record through a quarterback's first 40 career starts since 1970.

When Kaepernick last played, he wasn't faring much better. He was 26th in the NFL in QBR, 27th in completion percentage and 29th in yards per attempt during the first eight weeks of the 2015 season before landing on injured reserve.

Kelly said the discussion and decision on quarterback won't be made right away, but he did say it would be his choice and that general manager Trent Baalke doesn't get involved in such matters.

"Any decision that's made with the current roster is a coaching staff thing," Kelly said. "Trent had never come in and said this guy has to play or that guy has to play. Trent does a great job of acquiring talent and getting players on this football team, but he's never once told me who has to play where and what the lineup is and all that."