Chris Johnson: 'One of my demons' 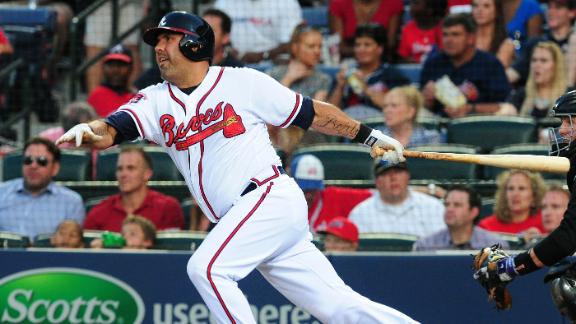 Chris Johnson was taken out of the Atlanta Braves' game Friday night -- by his own manager.

The veteran third baseman threw a tantrum in the tunnel to the Braves' clubhouse following a second-inning strikeout, leading manager Fredi Gonzalez to remove him for Ramiro Pena in the top of the third against the Colorado Rockies.

Atlanta went on to beat the Rockies 3-2, and afterward, Johnson said he was sorry for his behavior.

"I apologized to the team about that after the game and to Pena for having to pick me up," Johnson told reporters, according to The Atlanta Journal-Constitution. "I'm sorry to the fans, people who came out to watch me play today. That's just one of my demons. That's one of those things I've got to try to get through and get better at.

"It's like getting tossed out of a game in the first inning. Pena has to go in and get ambushed and the team doesn't know what's going on, and I let my emotions get the best of me. First and foremost I wanted to talk to the team and let them know that I was deeply sorry for that and that I was going to work my butt off to fix that part of my game."

It's not the first time Johnson's temper has gotten the best of him.

According to the Journal-Constitution, he was benched for two games in April after erupting following two four-strikeout games in a three-day span. He also reportedly got into a confrontation with Braves first-base coach Terry Pendleton last year after throwing his helmet in anger.

On Friday night, Johnson blew up after Rockies right-hander Jordan Lyles struck him out to lead off the second inning. It was the third baseman's 10th strikeout in the past eight games.

Johnson was followed into the tunnel by Braves teammates and coaches.

"I play with a lot of passion every single pitch, every single at-bat," Johnson said, according to The Atlanta Journal-Constitution. "I hold with pretty high regard, and then when things don't go well, that's kind of my downfall. That's one of the biggest parts of my game that I've got to try to work on. And yeah, hurting myself would be bad. One of the worst things I could probably ever do would be hurt a teammate or something like that, and both of those would really hurt the ball club. So I think that was Skip's reasoning for taking me out of the game."

"I agree 100 percent with his decision," Johnson said. "It was the right thing to do. Taking me out of the game and not letting me play is probably the worst thing to do to me because all I want to do is get out there and play, and whatever the punishment may be, I'll take it like a man and try to get better at that."

The Braves signed Johnson to a $23.5 million, three-year extension earlier this month.

The 29-year-old is hitting .265 with one home run and nine RBIs in 46 games this season. He hit .321 last year, finishing second in the National League batting race behind the Rockies' Michael Cuddyer.