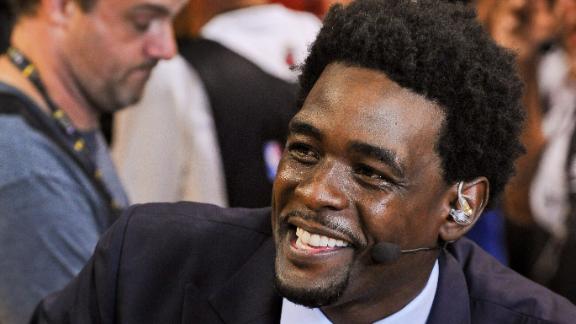 Former All-Star Chris Webber is making a play to re-enter the NBA.

Webber leads the Webber Group, which has informed the league of its desire to purchase majority interest in the Atlanta Hawks. The franchise is for sale in the wake of a controversy involving racially charged comments made by owner Bruce Levenson and general manager Danny Ferry.

The Hawks have been under fire since it was revealed Levenson sent an email two years ago theorizing that many suburban white fans would not attend NBA games because of the team's African-American fan base. He agreed to sell his share of the team, but it also emerged that Ferry had disparaged then-free agent Luol Deng on a conference call with team owners this past summer, saying Deng "has a little African in him."Ferry took an indefinite leave of absence in mid-September.

In September, Atlanta mayor Kasim Reed said he had talked with six potential buyers and that he wanted former Hawks great Dominique Wilkins to be involved in some way so that the issues with the team could be solved "the Atlanta way."

Webber played 15 seasons with five teams, averaging 21 points and 10 rebounds in 831 games. He was a five-time All-Star and was named rookie of the year in 1993-94. He is perhaps best remembered for calling a timeout Michigan did not have during the 1993 NCAA title game, and also was linked to receiving improper benefits while with the Wolverines.