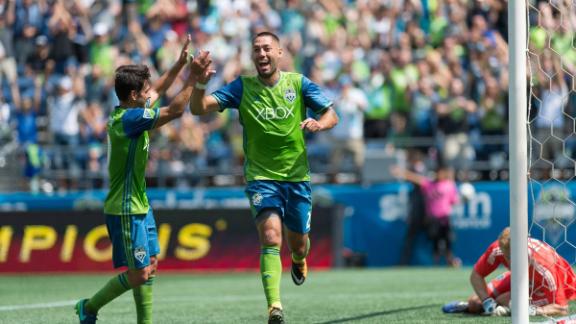 Clint Dempsey scored his 50th career goal for the Seattle Sounders to provide a 1-0 win over Sporting Kansas City on Saturday.

Dempsey headed home from a Jordan Morris cross in the 36th minute to reach the landmark in his fourth full season with Seattle since his return to MLS in 2013.

After regaining control of the ball high on the right wing side, Morris took it toward the end line and floated a cross into the penalty area. Dempsey met it eight yards in front of the net and headed it into the back right corner past goalkeeper Tim Melia.

He became the second player to reach 50 goals for the club after Fredy Montero, who has 60. He has 10 goals this season, and three in his past two games.

The Sounders extended their club-record shutout streak to 400 minutes and pulled level on points atop the Western Conference with Sporting KC, which was playing on short rest after Wednesday's U.S. Open Cup win, and they lost for the first time since May 27.

"It's confidence -- that's what happens when you get on a streak like we're on," Dempsey said of Seattle's current eight-game unbeaten run that's featured five wins. "There are defining moments of the season when a team has to dig deep and show a lot of character. The moments that stand out to me are being 3-0 down versus New England and coming back and drawing that game, and being 3-0 down to D.C. United and coming back to win 4-3.

"I think those type of gut-check moments are when a team could fold, but we showed resilience and character. That helps with momentum."

The Houston Dynamo joined Seattle and Sporting KC on 37 points after a 3-0 win over the San Jose Earthquakes.

Alberth Elis headed home from a corner to provide the opener in the 21st minute, and it could have been 2-0, but Erick Torres' penalty was saved byTyler Deric.

Earthquakes defender Andres Imperiale was sent off for conceding the penalty, but after a video review was allowed to stay on the pitch with just a yellow card.

Elis then madeImperiale's night worse in the 86th minute as he nutmegged the defender before setting up Vicente Sanchez to score, andMauro Manotas added a third goal in stoppage time.

Players from both sides came together in stoppage time with some light pushing and shoving, and Kaka jokingly put his hands around the mouth of his former teammate Aurelien Collin from behind.

The players laughed it off immediately, but Kaka was shown a red card after MLS's video replay system was brought into play.

Carlos Rivas, with an assist from Kaka, put Orlando up 1-0 with his fifth goal in the 18th minute but an own goal by Leo Pereira leveled the game in the 30th minute.

Sea Davis set up the go-ahead goal in the 60th minute, slotting the ball forward to Alex Muyl with Bradley Wright-Phillips beating goalkeeper Joe Bendik to the spot on the centering pass for the redirect and his 14th goal.

Davis then took a throw-in from Kemar Lawrence, tapped it to his right and curled perfect shot from distance in the 80th minute.