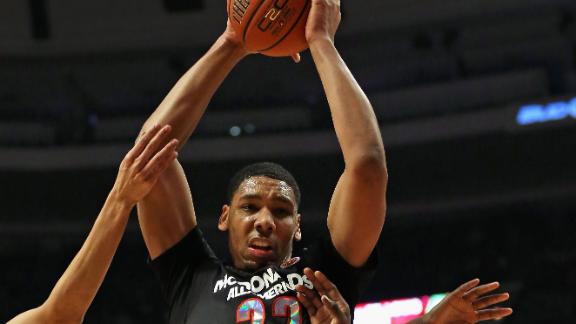 CHICAGO -- Jahlil Okafor and Justin Jackson are ready for the rivalry on Tobacco Road.

Okafor scored 17 points and had seven rebounds and Emmanuel Mudiay added 15 points as the West team defeated the East 105-102 in the boys' McDonald's All American Game on Wednesday night.

Jackson, who shared co-MVP honors with Okafor, led the East with 23 points. The North Carolina commit was 11-of-14 shooting.

Tyus Jones made a 3 with 1:46 left to get the East within 99-98 and his fadeaway baseline jumper gave the East a short-lived lead with 47.7 remaining, but his future Duke teammate gave the West the lead back for good with a dunk with 40 seconds left.

Okafor and Jackson are expected to be key figures in the storied rivalry between Duke and North Carolina.

"I am definitely excited to get down to Durham and be part of the greatest college basketball rivalry," Okafor said. "There has been a lot of trash talk between us and the recruits going to North Carolina. We're all competitors so we're all looking forward to it."

Jackson also has already bought into the rivalry.

"We're all good friends off the court so we all built good relationships off the court. We're looking forward to getting to North Carolina, but once we got on the court, that friendship kind of went out the window," he said.

Okafor and Jones also will be joined by All-American Grayson Allen. Jackson will team up with fellow All-Americans Theo Pinson and Joel Berry.

Indiana commit James Blackmon Jr. missed a 3 with 2.9 seconds left that would have tied the game for the East.

Rashad Vaughn, who is going to UNLV, made a jumper and then had a dunk to give the West an 82-74 lead midway through the half, but Jackson kept the East in the game, scoring seven points in a 2:10 span.

Mudiay, who will play for Larry Brown next season at SMU, drove the lane for a dunk in the final seconds to close out the first half as the West cut the East lead to 51-50.