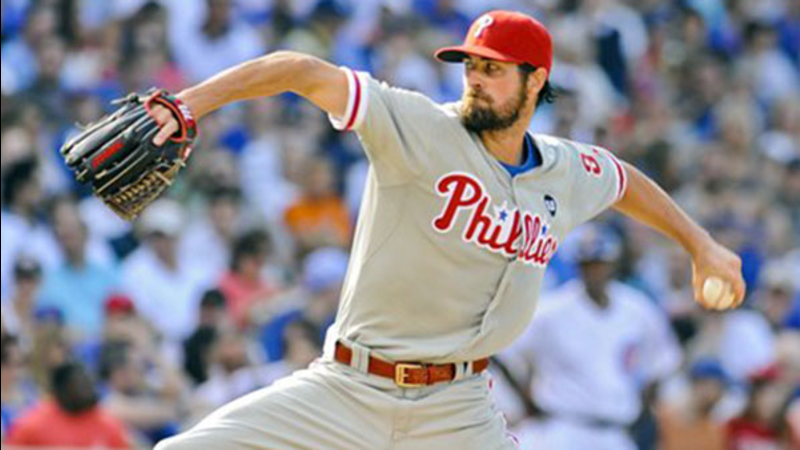 CHICAGO -- The scouts packed the seats behind home plate, and Cole Hamels put on quite a show. The lanky left-hander was dominant on a picturesque afternoon at Wrigley Field.

Quite the timing, too.

Hamels struck out 13 in baseball's third no-hitter of the season, leading Philadelphia to a 5-0 victory over the Chicago Cubs on Saturday in what might be his final start for the Phillies.

Hamels (6-7) was in control right from the start against the contending Cubs, and then got some help from rookie center fielder Odubel Herrera in the final two innings. It was the fourth no-hitter for catcher Carlos Ruiz, including the playoffs, according to STATS - tops in NL history and tied with Jason Varitek for the major league record.

NOW WE CAN SAY IT! COLE HAMELS HAS THROWN A NO-HITTER! pic.twitter.com/qXCZzlWOej

It was the 13th no-hitter for the Phillies, who have the majors' worst record and could rebuild their farm system with a big haul from a Hamels deal. The 31-year-old lefty also was part of Philadelphia's previous no-hitter, teaming with three relievers for another gem last Sept. 1 at Atlanta.

Since 1900, only two pitchers have thrown a no-hitter and then got traded in the same season: Cliff Chambers from Pittsburgh to St. Louis in 1951, and Edwin Jackson from Tampa Bay to the White Sox in 2010.

It was the first no-hitter against Chicago since Sandy Koufax pitched a perfect game at Dodger Stadium in 1965. Dexter Fowler walked twice, but he was the only baserunner for the Cubs.

Cole Hamels' no-hitter is the first against the Cubs since Sandy Koufax's perfect game on Sept. 9, 1965. pic.twitter.com/6afCj26J8b

Hamels "definitely increased his value, I would imagine," Cubs manager Joe Maddon said. "You're going to get that higher-tier prospect because of that performance today."

Ryan Howard hit a three-run homer off Jake Arrieta (11-6) in the third, but Herrera had the two biggest plays.

With one out in the eighth, he ran a long way into the gap in left-center to grab David Ross' fly and then spilled onto the warning track. Cubs rookie Kris Bryant launched a long fly with two outs in the ninth, but Herrera raced back and managed to lean forward for the catch after slipping on the track in front of the ivy-covered brick wall.

"It feels awesome. I feel proud to be part of it," Herrera said through a translator.

Hamels had a big smile on his face as he hugged Howard and Ruiz after the final out. The rest of the Phillies then mobbed the pitcher near the mound while the crowd of 41,863 delivered a long standing ovation.

Cole Hamels: "it's a "surreal moment. Nothing will top winning a world series.. but this right under it" #colehamels pic.twitter.com/lyRrM42h7D

Arrieta struck out eight in six innings. The right-hander, who knows what it's like to lose a no-hitter late in the game, was 5-0 with a sparkling 0.96 ERA in his previous six starts.

"Cole was special today," he said.

Before Saturday's outing, it looked as if all the trade rumors were taking a toll on the usually dependable Hamels. He allowed 14 runs and 20 hits over 6 1-3 innings in his previous two starts. He was 0-4 with a 5.56 ERA during a nine-game winless streak, which matched a career high.

But Hamels said he likes pitching in Chicago, and it showed on the three-year anniversary of his $144 million, six-year contract with the Phillies.

"There's a great history in this ballpark and it's a fun place to come and play," he said. "I know it's one of our top places to play. I grew up watching on WGN and the Cubs play. To be able to play in a day game just knowing I'm able to go out there and enjoy it and be myself - and obviously this is what happened - it's a special feeling."