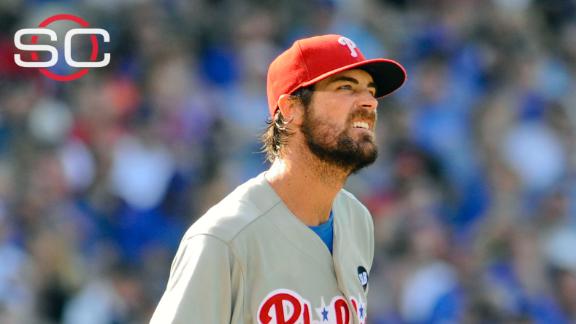 CHICAGO -- Fresh off baseball's third no-hitter of the season, Cole Hamels is preparing to start for the Philadelphia Phillies on Thursday.

That could change in a hurry.

Hamels could be on the move after he dominated the Chicago Cubs in a 5-0 victory on Saturday afternoon, striking out 13 in the 13th no-hitter in franchise history for the Phillies. The 31-year-old left-hander has been mentioned prominently in trade talks ahead of Friday's non-waiver deadline.

Sources told ESPN.com's Jayson Stark that the Texas Rangers and Los Angeles Dodgers have emerged over the weekend as the likely favorites to trade for Hamels.

Hamels threw a season-high 129 pitches in his first win since May 23, but said Sunday he was feeling good.

"Everything felt more in sync than it had," he said. "I don't feel like I threw as many pitches as I did. That's a good sign. It means I was throwing correctly."

Hamels said he celebrated the no-hitter with family and friends, and received congratulations from Roy Halladay, Cliff Lee, Roy Oswalt and Brett Myers.

"That was nice because those guys all helped impact me," Hamels said.

Hamels also was part of Philadelphia's previous no-hitter, teaming with three relievers for another gem last Sept. 1 at Atlanta. It was the first no-hitter against Chicago since Sandy Koufax pitched a perfect game at Dodger Stadium in 1965.

The Baseball Hall of Fame requested Hamels' cap from the game, but there might be one issue.

The no-hitter stopped all talk about what might be wrong with Hamels after he went 0-4 with a 5.56 ERA during a nine-game winless streak, which matched a career high. The 2008 World Series MVP allowed 14 runs and 20 hits over 6 1/3 innings in his previous two starts.

Hamels said after the game that he had been working on his mechanics the last couple of days. He even made an adjustment during the no-hitter by staying over the rubber longer, pitching coach Bob McClure said.

"The good ones are able to adapt," McClure said. "It's fun to watch."

First baseman Ryan Howard said he had a feeling Hamels could complete the no-hitter when center fielder Odubel Herrera made the first of his two diving catches in the eighth. Herrera also made a falling catch for the final out of the game.

"Anytime you can be a part of history of the game, that's always going to be special," Howard said. "To see him do it in the fashion he did and having Odubel going out there and making two crazy catches, especially the one to end the game -- you could ask for a better finish, but that was pretty much icing on the cake."