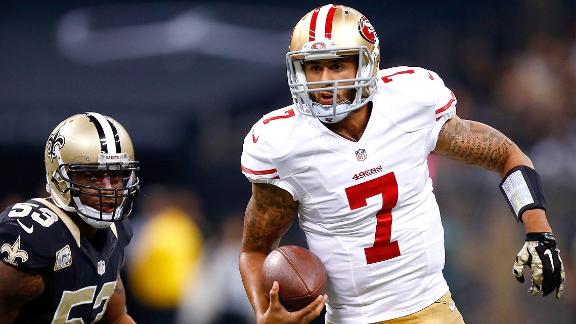 After struggling this past season, San Francisco 49ers quarterback Colin Kaepernick has sought out and will receive tutoring from retired two-time NFL MVP Kurt Warner this offseason, according to a report.

The Sacramento Bee reported Wednesday that Kaepernick will train and study with Warner -- as well as quarterbacks coach Dennis Gile -- with film, board work, drills and mental aspects of the game at EXOS in Phoenix.

"If we can teach him [consistency and efficiency], then I think he becomes one of the most dangerous quarterbacks in the NFL," Gile told the Bee. "Because you can't teach the natural talents that he has."

Kaepernick is scheduled to arrive in Phoenix next week and will train at EXOS until the 49ers' offseason program begins in March, according to the newspaper. Odell Beckham Jr. of the New York Giants and Jarvis Landry of the Miami Dolphins are among the receivers expected to train at EXOS this offseason. Three of Kaepernick's teammates -- receivers Quinton Patton and Bruce Ellington, fullback Bruce Miller -- also are expected to train there, according to the newspaper.

Kaepernick's mechanics came under scrutiny this season as the 49ers' offense struggled to find consistency after moving away from the power-running game that helped them advance to three straight NFC title games.

"There's always things you can tighten up," Kaepernick said in December."It's hard to break habits in-season. You don't want to completely try to change something because it can throw off everything else you're doing."

He had 19 touchdown passes and 10 interceptions this season.

Paul Gutierrez of ESPN.com contributed to this report.