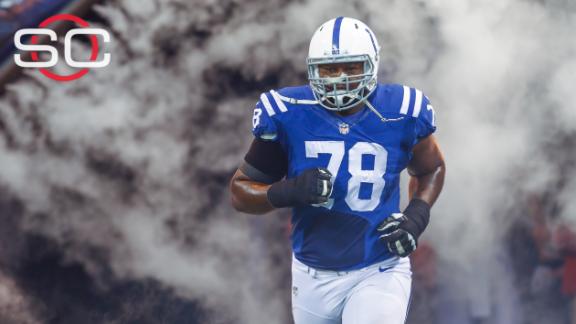 He was one of the main free-agent acquisitions by the Colts in 2013, when Cherilus signed a five-year, $34 million contract.

Cherilus failed to live up to his contract despite starting 29 games the past two seasons. He battled knee, shoulder and groin problems last season before eventually being placed on injured reserve prior to the playoffs.

The 31-year-old Cherilus had offseason knee surgery, which kept him from taking part in organized team activities, including a mandatory three-day minicamp in June.

"We had some conversations with the Colts [during the last week], and they wanted us to do something contractually that we were not comfortable with," Diulus said. "But Gosder is very healthy, very much in shape and very much looking forward to the season."

The Colts had serious doubts about Cherilus' health. Jack Mewhort, who started 13 games at left guard as a rookie last season, worked exclusively with the first unit at right tackle during all offseason activities.

Diulus believes Cherilus is ready to go physically, which he said the Colts knew.

"He did what he was supposed to do. He visited the doctors this week, and he passed everything with flying colors," Diulus said. "He's going to play somewhere this year."