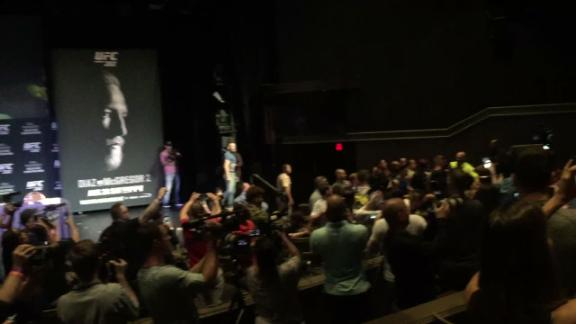 LAS VEGAS -- For the second time this year, emotions ran high between Nate Diaz and Conor McGregor at a UFC media event.

The two are scheduled to fight for a second time this weekend, at UFC 202 inside T-Mobile Arena. The welterweight bout is a rematch of a fight at UFC 196 in March. Diaz, who accepted that bout on 11 days' notice, won via second-round submission.

Prior to the first fight, McGregor punched Diaz's hand during a prefight staredown. Diaz's camp, including his older brother and UFC welterweight Nick, immediately jumped on stage and security was forced to break it up.

The two were at it again on Wednesday. After McGregor (19-3) arrived to the news conference approximately 30 minutes late, Diaz (19-10) decided to walk out.

Diaz and McGregor jawed at one another from a distance as Diaz and his camp of about 10 left the theater. McGregor smiled at first, but the two soon began yelling after Diaz flipped him off.

Before exiting, Diaz threw what appeared to be a water bottle toward the stage. McGregor, who is still the UFC featherweight champion but demanded a non-title rematch against Diaz after the first fight, responded by grabbing full water bottles from the dais and launching them in Diaz's direction. Security was once again quick to break it up.

UFC president Dana White, who appeared agitated at the start of the news conference when McGregor didn't show up, then said, "That's a wrap. Get them out of here."

McGregor, from Dublin, Ireland, has butted heads with the promotion in the past regarding media obligations. Earlier this year, he refused to interrupt a training session in Iceland to fly to Las Vegas for a scheduled news conference and commercial shoot. The UFC responded by pulling him from a UFC 200 main event on July 9.

"The Vegas traffic is heavy this time of the day," joked McGregor after arriving to Wednesday's news conference late. "There must be a McGregor show going on because the place is packed out."

In 2014, the Nevada State Athletic Commission fined Jon Jones $50,000 and Daniel Cormier $9,000 after they were involved in a brawl in the lobby of the MGM Grand Las Vegas Hotel & Casino.

"I'm disappointed," said NSAC chairman Anthony Marnell III. "I wish for them, the UFC and the mixed martial arts community that they would act like the professionals they are. We will address what happened at the press conference in the normal course of business." 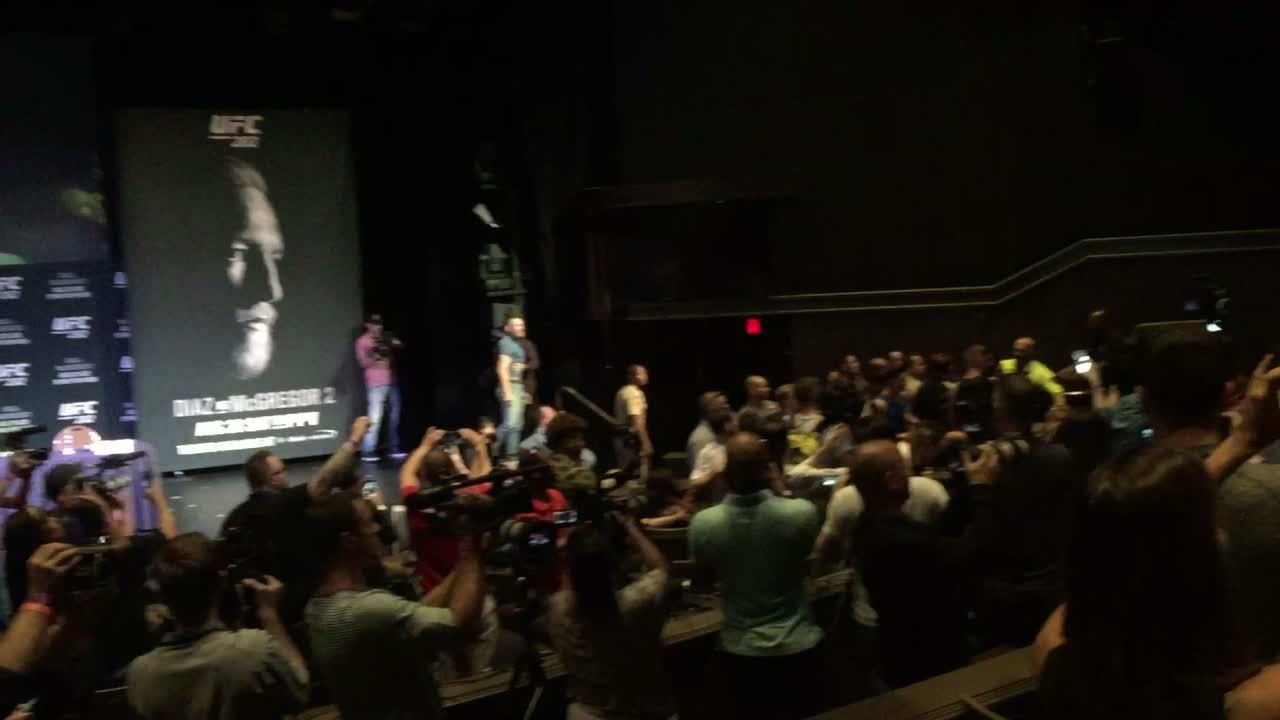