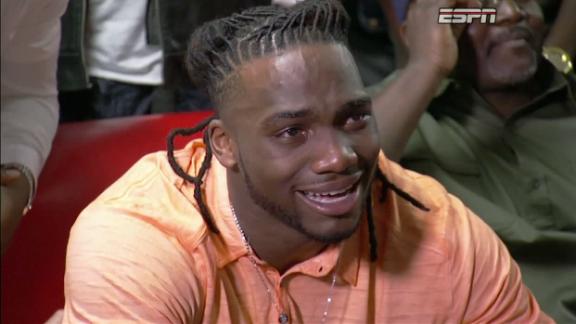 IRVING, Texas -- The Dallas Cowboys selected Jaylon Smith in the second round of the NFL draft on Friday night, ending the Notre Dame linebacker's slide at No. 34 overall.

"It's been the most challenging time of my life, but at the same time, it's the best time of my life, where my dream has just come true," said Smith, who is questionable to play in 2016. "I've been wanting to play in the NFL since I was 7 years old."

Smith suffered a torn ACL and LCL in his left knee on Jan. 1 in the BattleFrog Fiesta Bowl against Ohio State. The delay in his return to the field is due to nerve damage, but the Cowboys are confident the nerve will refire. One of the team's doctors, Dr. Daniel Cooper, performed Smith's knee surgery and is more familiar with his recovery than anyone else.

"For me, it's just progressing each and every day," Smith said. "I've been running for three and a half weeks now. It's just a process, and time is definitely a place where you have to be patient. I've been killing it."

Smith did not want to rule out playing in 2016.

"I get different sensations every day with the nerve, but it's just timing," Smith said. "I'm only three and a half months out, so time will definitely tell, but the knee is fine. That was cleared at the medical recheck, that the knee won't have any issues. It's just a timing issue for the nerve. It's too early in the process to tell."

Like Smith, owner and general manager Jerry Jones would not rule out the possibility of the rookie playing this year.

Jones said the Cowboys targeted Smith with their second-round pick since the start of the week. Once the Cowboys decided to accept the medical risk, Jones said Smith made the most sense because of his potential.

"We're not buying bonds here," Jones said. "This isn't risk-free. You can have one and have no medical [issue], and he's riding a bicycle and can have a medical [issue]. There's all kinds of risk when dealing with the human factor and all these things that happen.

"So, not to get smug, but when you've got a player we think can be a cornerstone defensive player, a real impactful player, a player we've got in our top five ... it's within our tolerance to risk-taking to use that pick."

Had the 6-foot-2, 223-pound Smith not gotten hurt, he could have been an option for the Cowboys with the fourth overall pick. Smith will receive $900,000 via loss of value insurance, which is tax-free, a source with knowledge of the policy told ESPN's Darren Rovell.

Smith led Notre Dame with 113 tackles last season and won the Butkus Award as the nation's best linebacker. He also had nine tackles for loss and five pass breakups.

Cooper is not Smith's only connection to the organization. His brother,Rod Smith, is a running back for the Cowboys.