Cowboys QB Tony Romo out for season with fractured collarbone 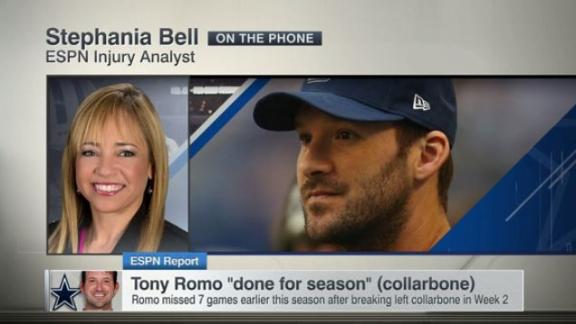 The team announced the injury on Friday evening.

According to sources, the scan showed a small crack in the healed portion of the distal fracture that Romo suffered in the Sept. 20 win against the Philadelphia Eagles that caused him to miss seven games.

Romo will not have surgery, Jones confirmed, and should be 100 percent for the offseason program in March.

The hit from Davis was similar to the hit he received from Philadelphia linebacker Jordan Hicks, with Davis landing on top of Romo and driving his shoulder into the turf. X-rays at the stadium were inconclusive, but the CT scan showed the break Friday.

Without Romo, Matt Cassel will be the starter and the Cowboys will likely look to add Kellen Moore off the practice squad. Cassel went 0-4 after being acquired from the Buffalo Bills on Sept. 23. Moore spent six weeks on the active roster after Romo suffered the initial collarbone injury.

This is the second time in six seasons that Romo has had his season end with a broken left collarbone. He missed the final 10 games of the 2010 season with the injury.

Romo spent eight weeks on the injured reserve/designated to return list this year and was practicing with the scout team after six weeks. Hereturned Nov. 22 against the Miami Dolphins and was playing his second game in five days on Thursday.

"We wouldn't let Tony play if he wasn't ready to play physically," coach Jason Garrett said after the game. "There is no evidence we brought him back too soon."

Speaking on 105.3 The Fan, Jones said there was nothing that was "premature" in Romo's return to the field. When he resumed playing, Romo acknowledged the possibility of a re-break was real.

"We felt that the risk was worth the potential of having him be the impact he can be and he is on our team," Jones told The Fan. "And really having a fairy tale turnaround and doing something that was special, to me, that's what we're about. That's what sports is about. You shouldn't ever quit trying to do something that is extraordinary.

"This time last year, for instance, Carolina was 3-8-1, and so it happens. Of course, with Tony, the dream was if Tony could have come in, been the catalyst, played similarly and had results we had the week before against Miami, against a really great team ... that it would've been the beginning of maybe something special."

Instead of the comeback turning into something special, it now raises questions about Romo's future. He turns 36 in April and is signed through 2019. The Cowboys toyed with the idea of drafting a quarterback last spring but did not pull the trigger. They have drafted just two quarterbacks since Troy Aikman retired and none since taking Stephen McGee in the fourth round of the 2009 draft.

At 3-8, the Cowboys could be in position for a top-five pick for the first time since 2003.

Dallas does not play again until Dec. 7 on ESPN's Monday Night Football against the Washington Redskins. The players are off until Wednesday.

Full offseason should heal Tony Romo
After the second clavicle injury of the season for Tony Romo, ESPN Injury Analyst Stephania Bell says the Cowboys quarterback will be out for the remainder of the season but should be fully healed for the start of the 2016 season.

Report: Romo out for remainder of season
Ed Werder reports that Cowboys QB Tony Romo is likely out for the remainder of the season after suffering another collarbone injury against the Panthers.