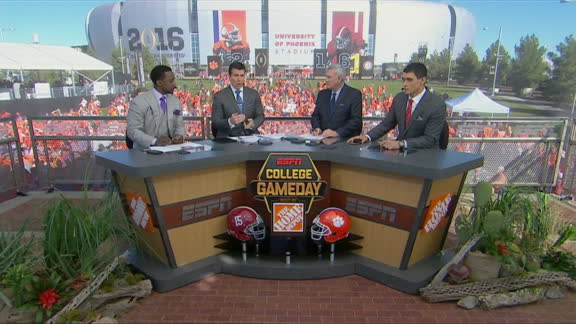 All-American defensive end Shaq Lawson will start and All-American cornerback Mackensie Alexander is expected to get playing time when Clemsontakes on AlabamaMonday in the College Football Playoff National Championship Presented by AT&T.

Alexander, battling a hamstring injury, took part in team warmups at University of Phoenix Stadium, even high stepping with teammates before the game,while Lawson has been recovering from a sprained MCL in his left knee but will start, the team announced before the game.

Upon his team's arrival to University of Phoenix Stadium, coach Dabo Swinney didn't seem particularly worried about either player's availability and said he expects both on the field against Alabama.

Alexander is expected to be matched up against Alabama's best deep threat,Calvin Ridley. The spokesman said the staff is waiting to see how Alexander feels after warm-ups and will then make a determination on his playing status.

Hesuffered the injury Dec. 31 during the Capital One Orange Bowl against Oklahoma.Alexander has worked out with the team since but is still not considered 100 percent.

Swinney noted that "we still won by 20 points" after Lawson was hurt and said, "We just play ball. That's what we do."

Lawson, who leads the nation in tackles for loss (23.5), said Saturday that there is a "very good chance" he will play. Clemson officials told ESPN's Mark Schlabach that Lawson is likely to play Monday, though one official said Lawson is not 100 percent.

Like Alexander, Lawson will warm up with the team before a final determination will be made.

Information from ESPN's Marty Smith andSam Khan Jr. and The Associated Press contributed to this report.