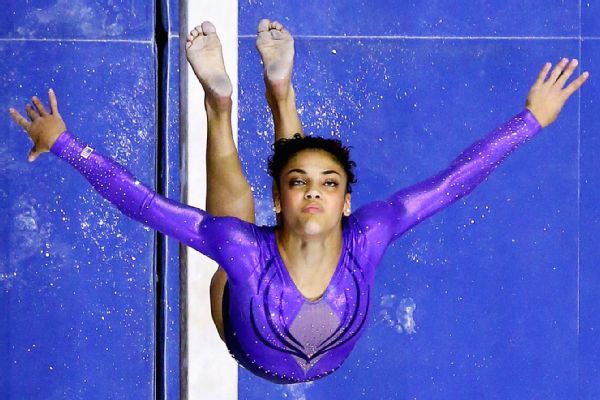 Laurie Hernandez has had a pretty big year. She won gold and silver medals representing the United States in gymnastics at the Summer Olympics in Rio de Janeiro.

Then the 16-year-old came home and decided to appear on the 23rd season of "Dancing with the Stars." And on Tuesday night, she won that too to take home the Mirror Ball Trophy.

"I just want to thank everyone for the support and riding along this crazy roller coaster of my life," Hernandez said on the show minutes after winning the trophy. "My goal is just to inspire others as I go on with my journey, and thanks for being there for me."

She scored a perfect 40 of 40 in her last dance of the competition with partner Val Chmerkovskiy, a fusion foxtrot/Argentine tango that was also the last overall dance of the night. It also might have been her best performance on a night when all three finalists -- Hernandez, IndyCar driver James Hinchcliffe and ex-Detroit Lions receiver Calvin Johnson -- notched perfect scores.

Hernandez earned rave reviews throughout the competition, enough that she will actually be joining the "Dancing with the Stars" tour that will be staged in a few months. The judges cited her ability to learn as a performer beyond her dancing skills throughout the almost three-month-long competition, in which she was the youngest competitor.

"You have given us spectacular dance after spectacular dance," judge Carrie-Ann Inaba said after Hernandez's final dance on Tuesday night. "Blowing my mind every time you come out here. But I have to say, quite honestly, this was by far, for me, your best dance ever."

All three dancers, as expected, were heavily praised during the finale in Los Angeles.

Hinchcliffe's final dance, a fusion of a Viennese waltz into a foxtrot, fit in with what Hinchcliffe had done all season, which was to become one of the better male dancers the program has had. That was something pointed out by multiple judges throughout the season.

Hinchcliffe also had a strong chemistry with his partner, Sharna Burgess, who he gifted his racing fire suit from his first race back after an accident that almost killed him.

"When I see you dance like that, it's completely understandable why you're here," judge Len Goodman said after Hinchcliffe's final dance. "You are a terrific dancer. What I love, firstly, is the chemistry between the two of you is great.

"I can say no more than this. I wish I could dance like you."

Johnson's perfect score of 40 came off a jive/quickstep fusion dance with Lindsay Arnold that fit the abilities he displayed throughout the season. He often excelled when dances had speed and required fast feet. He was the surprise finalist, considering how often those around him made sure to say how much he couldn't dance prior to the show.

Johnson proved the naysayers wrong throughout the season.

"You just engage everybody," judge Bruno Tonioli said after Johnson's final dance on Tuesday. "You make us happy. You make us want to dance."