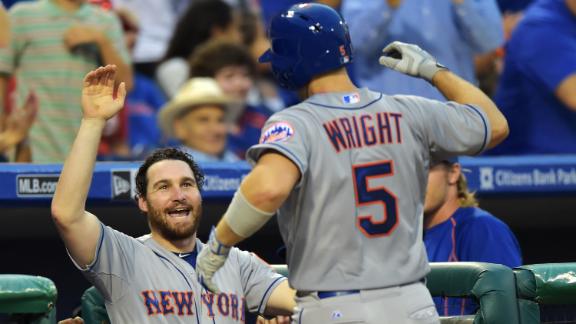 PHILADELPHIA -- On the eve of his first major league game in 132 days, New York Mets captain David Wright purchased cookies from a favorite Philadelphia shop, dressed in his full road gray uniform out of "boredom" and greeted his teammates in the lobby of their five-star hotel as they arrived from Denver after a weekend sweep of the Colorado Rockies.

"I'm unpacking my baseball stuff and I'm like, 'Why not?'" Wright said with a laugh.

Wright's return to the lineup Monday was an equally big hit among his teammates.

In his first game since April 14, Wright finished 2-for-5 with a solo homer, three runs scored and a walk as the Mets beat the Philadelphia Phillies16-7 in the series opener at Citizens Bank Park. He also committed two errors at third base.

Wright, 32, had been dealing with spinal stenosis -- a narrowing of the spinal cavity, which placed pressure on nerves in his lower back and at one point made it difficult to stand upright.

"I had to be careful. I almost pulled a Wilmer Flores out there," Wright said, alluding to how Flores began crying on the field on July 29, when he thought he was getting traded to the Milwaukee Brewers. "You try to keep your emotions in check. You're proud that you get back to this point. You're happy. You're satisfied. But, at the same time, you understand that we're right in the middle of a pennant race and you've got to play good baseball. I think I'm up for that challenge."

Wright slugged a solo homer into the second deck in left field against left-hander Adam Morgan in his first major league at-bat in more than four months.

Wright actually has homered in his first at-bat off the DL after each of his last two trips. Both long balls have come in Philly. He also took Cole Hamels deep on Sept. 20, 2013, after a seven-week absence for a hamstring strain.

Wright now has 20 career homers at Citizens Bank Park, the most of any visiting player since the ballpark opened in 2004.

"When you're thinking about coming back -- and I had a lot of time to think about it -- you think of different scenarios," Wright said. "You think of your first at-bat and what it's going to feel like and trying to keep your emotions in check and things like that. It couldn't have been any better for me, personally, my first at-bat."

Wright's first error came in the fifth, when he failed to handle a line drive off the bat of Cameron Rupp. His second error came on a two-out grounder from Jeff Francoeur an inning later, which loaded the bases. Reliever Sean Gilmartin then coaxed a foul popout from Domonic Brown to bail out Wright.

"You can play in 100 minor league games," Wright said. "You can't force the ball to be hit to you. The thing that upset me the most is that second one, that was the same play that I messed up twice in the minor leagues -- the hard-hit ball that's got a little hook to it. I just need to backhand it instead of trying to force my body around it. I'm confident that will come. I need to cut them out as soon as possible. Obviously we're in a pennant chase."

With the Mets having overcome a five-run deficit to take a touchdown lead, manager Terry Collins asked Wright if he wanted to ease back into the majors by watching the final few innings from the dugout. Wright declined and played the full game.

"I feel good," Wright said. "Terry came up and said, 'Do you want me to get somebody in there for you?' in like the seventh. I said, 'Is this because you're worried about me physically? Or is because you want to get somebody who can catch the ball?' He said, 'No, just physically.' I said, 'I feel good.' The adrenaline is pumping. Everything felt pretty good. Day 1 was a good one."

At his locker after the victory, Wright kept harping on how giddy he was to be participating with the Mets in a pennant race. With Chase Utley getting traded by the Phillies to the Los Angeles Dodgers, Wright is now the longest-tenured active player who has appeared with only one team. Since the Mets came within a game of the World Series in 2006, he has endured two collapses, followed by six straight losing seasons.

Now, Wright is rejoining a Mets team that owns a season-high 5-game lead over the once heavily favored Washington Nationals for first place in the National League East.

"You watch it on TV, and now to be a part of it, you understand that this team seems to be on a mission," Wright said. "And I'm glad to be a part of it. ... There were a lot of down years to get to this point where we are now. But it's a fun squad and the fans are into it. It's going to be a fun last six weeks."