Defeated in Dallas: Eagles fall to Cowboys in OT 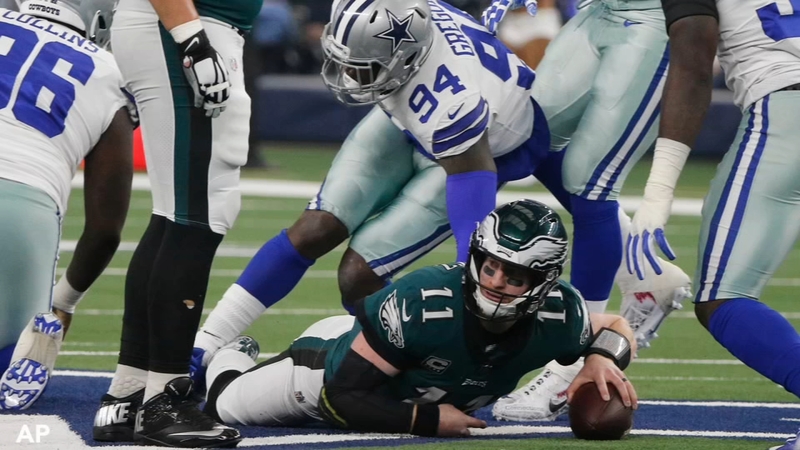 Needing a win at NFC East rival Dallas to have the chance to determine their own fate in the division race, the Eagles instead lost 29-23 in overtime Sunday - even after tying the game three times in the fourth quarter.

Carson Wentz threw two touchdown passes in a span of just over 1 minutes near the end of regulation. But Wentz and the Eagles offense never got on the field again after Darren Sproles' 6-yard TD catch with 1:39 left tied the game at 23.

"It was a tough loss. We knew the stakes of this game," Wentz said.

"We're absolutely surprised where we're at. We never envisioned ... a losing record at this point in the season," he said. "It's extremely frustrating where we're sitting right now."

Right now, the Eagles (6-7) are outside of the top six NFC teams to make the playoffs. They had won two in a row for the first time this season before going to Dallas.

And their next two games are at the NFC West champion Los Angeles Rams next weekend before their home finale against AFC South-leading Houston. The Eagles finish the regular season at Washington.

Dallas (8-5) has to win only one of its remaining games - Indianapolis, Tampa Bay and New York Giants - to clinch the NFC East. The Cowboys have won five in a row after their third overtime win at home in four seasons against Philadelphia.

The game opened with what appeared to be a fumble recovery by Philly on the opening kickoff, with several Eagles players on top of the ball that clearly came loose. Linebacker Kamu Grugier-Hill emerged from the pile with the ball.

But after Pederson challenged the ruling of no fumble, and a lengthy replay review, the original call stood and the Cowboys kept the ball - even though the Eagles offense and Dallas defense had already gone on the field.

"Big pile, I guess. It's just unfortunate," Pederson said.
Referee Clete Blakeman told a pool reporter that replay confirmed there was a fumble, but that it is difficult to determine after that unless somebody had clear possession and control of the ball before the pileup.

"We just didn't have that on this one," Blakeman said.

Dallas, which got a 62-yard field goal from Brett Maher on the final play of the first half, was in Eagles territory and trying to set up for another field goal at the end of regulation when Dak Prescott was sacked on third-and-12 after the Cowboys called their last timeout.

The Cowboys won the toss in regulation, and the game ended on Amari Cooper's third touchdown catch after the ball was initially deflected by cornerback Rasul Douglas. The ball popped up and was grabbed by Cooper, who had a clear path to the end zone more than eight minutes into the overtime.

"I feel for Rasul because the last play, the ball comes out quick, he plays it exactly how he's supposed to," safety Malcolm Jenkins said.

An interception by Corey Graham set the Eagles up at the Dallas 2 midway through the third quarter, and Wentz threw a touchdown to Alshon Jeffrey on the next play. They were within 9-6 after the missed extra point.

Before that quick score to finally get on the board, the Eagles had five punts (three times going three-and-out) and a fumble . Wentz never got another chance after his third TD pass tied the game.

"Helpless feeling not going back on that field," Wentz said. "We just didn't do enough early offensively, and that cost us."

Eagles: At LA Rams next Sunday.