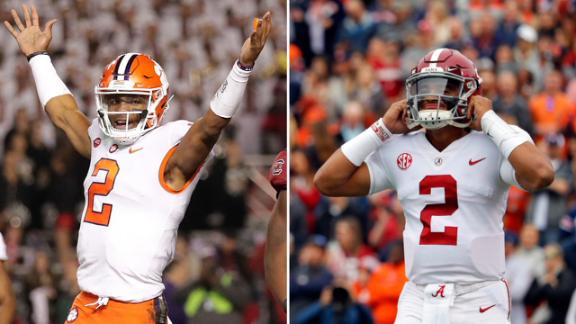 Losses by last week's top two teams, Alabamaand Miami, have shaken things up in the College Football Playoff rankings, as two schools made their first appearance in the CFP top four in the penultimate rankings of the season released Tuesday night.

At No. 2, Auburndebuted in the top four after knocking off its second top-ranked team of the season. The Tigers beat the Crimson Tide 26-14 in Saturday's Iron Bowl. Auburn previously beat Georgiawhen the Bulldogs were No. 1. Georgia (No. 6 this week) will have a chance at redemption as it faces a banged-up Auburn squad in Saturday's SEC championship game.

Auburn sits behind another group of Tigers asClemsonmoved up to No. 1 in the CFP rankings. The reigning champs are followed by Auburn, Oklahomaand Wisconsin.

The Badgers have spent the entire season on the outside of the CFP semifinal bubble looking in, but the only remaining unbeaten Power 5 school still needs one more win to stay in the top four. Wisconsin will take on Ohio Statein the Big Ten title game Saturday. Should the eighth-ranked Buckeyes win, they could provide a compelling argument for a spot in the semifinals.

The third-ranked Sooners will face TCUfor the Big 12 championship, and a loss to the No. 11 Horned Frogs on Saturday could kick Oklahoma out of a CFP semifinal.

Despite Saturday's loss to rival Auburn, coach Nick Saban believes Alabama "deserves an opportunity to get in the playoff," but that will depend on how conference title weekend goes. Having fallen to No. 5, Alabama will have to hope favorites like Oklahoma or Clemson lose. If that happens, the Crimson Tide's résumé may lift them back into the playoff.

Miami picked the worst time to suffer its first loss of the season, a stunning 24-14 defeat to unranked Pittsburgh. That loss dropped the Hurricanes from No. 2 to No. 7, and their only hope at getting back into the top four begins with a win in Saturday's ACC title game against Clemson.

"It's close separation from team No. 5 Alabama, [No.] 6 Georgia, [No.] 7 Miami, [No.] 8 Ohio State. Those teams are close," CFP committee chairman Kirby Hocutt said Tuesday night. "Very little separation in the committee's eyes between teams 5 through 8."

At No. 9, Penn Stateis probably the highest-ranked team without a possible path into the CFP top four. The final rankings will be released Sunday at noon on ESPN.

The Nittany Lions are followed by USC, the highest-ranked team out of the Pac-12. The Trojans will take on No. 12 Stanfordfor the conference championship Friday night. That game will be a rematch of a Sept. 9 USC victory.

TCU, Oklahoma's foe in the Big 12 title game, is ranked 11th. The Horned Frogs are followed by Stanford and Washington. The Huskies entered last week's Apple Cup ranked 17th, four spots behind rival Washington State, but a decisive 41-14 victory lifted them to No. 13 and sent the Cougars down to No. 18.

UCF, a winner over in-state rival USF in a high-scoring thriller Saturday, is the highest-ranked Group of 5 school at No. 14 and has designs on a New Year's Day bowl game. The only thing standing in the undefeated Knights' way is No. 20 Memphis. The two teams will play in the American championship game, with the winner likely playing in the Chick-fil-A Peach Bowl.

Notre Damefell from No. 8 to No. 15 after losing to Stanford. The Irish are followed by Michigan State, LSU, Washington State, Oklahoma Stateand Memphis. 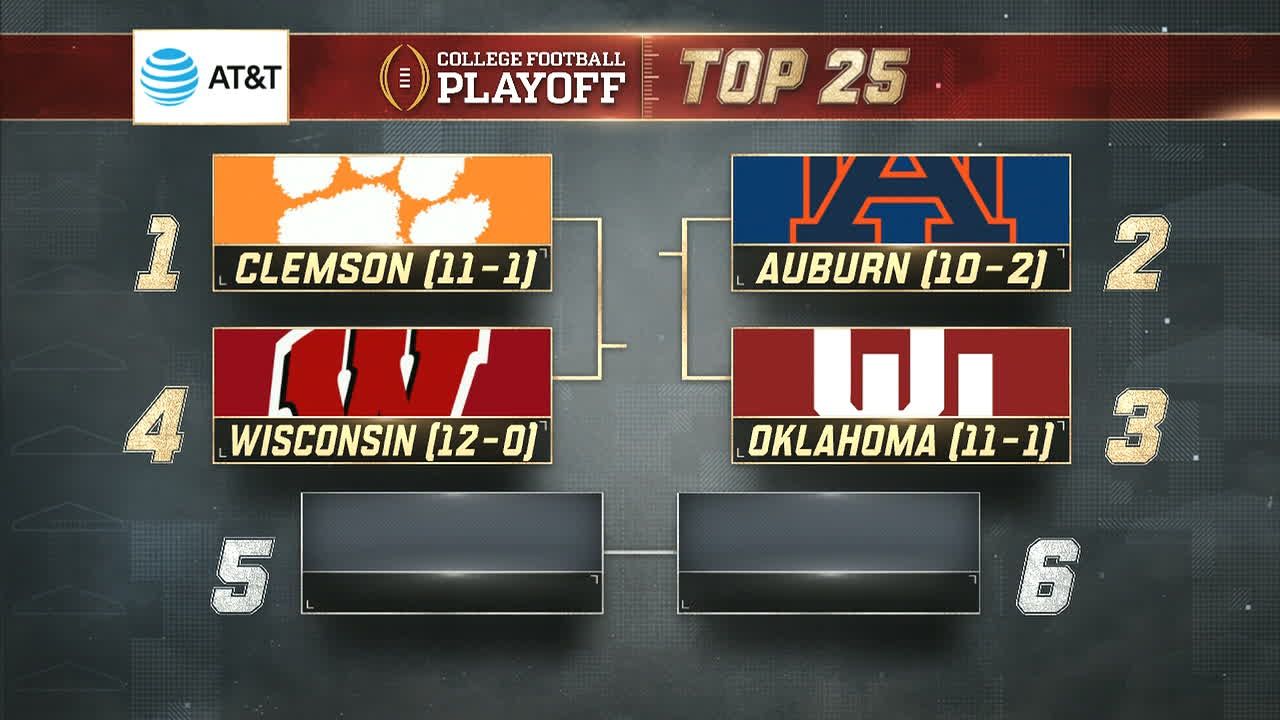