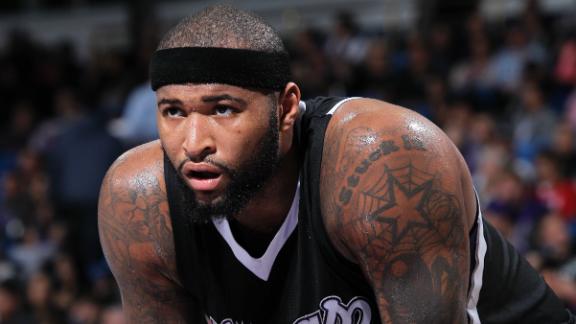 DeMarcus Cousins responded to Charles Barkley's criticism of him by saying he simply doesn't care about anything that comes out of the Hall of Famer's mouth.

"It ain't personal," Cousins said when asked about the TNT analyst. "I mean, I don't really respect the guy, but at the same time, I don't really care what he thinks either.

"I don't respect him, and I don't care what he thinks."

Barkley recently was critical of the Sacramento Kings All-Star center and even used an expletive to describe how disgusted he was when discussing reports that Cousins was consulted by the Kings before they agreed to hire coach George Karl last week.

"Why are they discussing it with him?" Barkley said during a TNT telecast. "Yeah, I am totally disgusted with that. ... He hasn't done enough to deserve that type of power. [The Kings] stink. Why would you give a guy that young that type of power?

"If you're a Kobe Bryant, Michael Jordan, Shaquille O'Neal, Hakeem Olajuwon or somebody like that, yeah, you deserved that type of power after you have earned it. Let me just say this either way, that's just total bulls---. That's ridiculous."

"A lot of people don't really know the real story about it," he said. "I never really had anything to do with it in the first place."

Barkley and Cousins are two of the best basketball products to come out of the state of Alabama, and both were selected fifth overall in their respective NBA drafts.

But Cousins said in a Bleacher Report feature last year that he felt Barkley has been critical of him since the former NBA great watched Cousins play in an Alabama high school state playoff game and talked to reporters.

Cousins also felt Barkley stuck up for Paul Westphal after the former Kings coach suspended Cousins for conduct detrimental to the team in 2012. Barkley played for Westphal in Phoenix.

Asked if Barkley is considered an authority because of his opinions on television, Cousins didn't seem to agree.

"I wouldn't necessarily say he's anybody of an authority," Cousins said. "I would just say he is very comfortable on the television."

Cousins Fires Back At Barkley
ESPN.com NBA writer Ohm Youngmisuk reacts to DeMarcus Cousins' comments about not respecting Charles Barkley or caring what he thinks.

DeMarcus 'Boogie' Cousins And Bill Simmons
DeMarcus Cousins explains to Bill Simmons how playing with multiple point guards and for multiple coaches has been challenging for him.