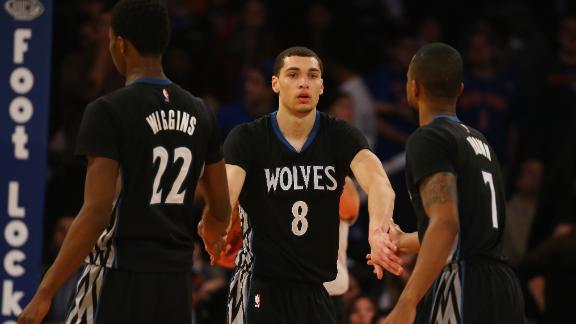 NEW YORK -- The Minnesota Timberwolves are so desperate for bodies that they signed a player Thursday based on how quickly he could get to the game.

The Timberwolves signed guard Sean Kilpatrick to a 10-day contract, and he arrived in time to give them the league-mandated eight players in uniform for their 95-92 win over the New York Knicks.

Listing eight players on their injured list, the Wolves didn't just need a player. They needed one who wouldn't take long to get here.

"We had to fulfill our rules, so we had to go find somebody that was within a train ride away," Wolves coach Flip Saunders said.

Kilpatrick actually drove -- from Delaware, where he plays for the 87ers' of the NBA Development League -- and arrived in the Wolves' locker room at Madison Square Garden about 45 minutes before the start.

He had found out a little after 3 p.m. following the 87ers' practice that he was headed to New York. He gathered his belongings and headed north.

"I was just getting ready. We had practice today to get ready to play one of the other D-League teams. I didn't think I was going to end up here," he said. "It's kind of a blessing."

Because of the injuries, the Wolves were granted an NBA hardship exception for a 16th roster spot.

They couldn't use it on a player from the Knicks' D-League team in nearby Westchester County, which would have been easiest, because those players were en route to Sioux Falls, South Dakota, for a game Friday.

Kilpatrick, the former University of Cincinnati star whose family is from New York, was close enough.

"We had him in before so we worked him out, so we knew about him and we've been following him, but there's no question that geography helped," Saunders said. "We had to have a guy here ready to play at 7:30."

Kilpatrick, who has averaged 13.6 points in 42 games this season with Delaware and Santa Cruz, went scoreless and had one rebound in 10 minutes of action Thursday.

"We'll be undermanned," Saunders said before the game, "but guys that have complained in the past about playing time won't have to worry about it tonight."