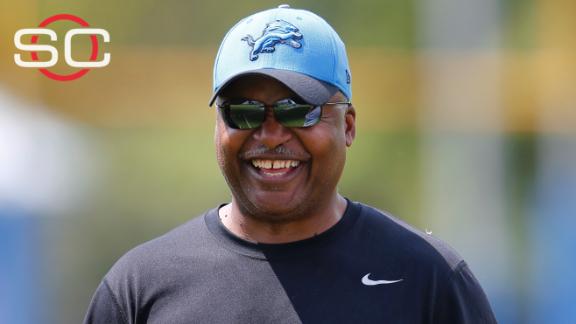 The Detroit Lions are staying with Jim Caldwell as their head coach, the team announced Friday.

"After spending a significant amount of time together, it is clear that our football philosophies are very similar," new general manager Bob Quinn said Friday. "Consequently, I am convinced he is the right man to lead our football team moving forward.

"Jim's entire body of work is impressive. Not only did he lead the Lions to the playoffs his first season here, but when you look at how the players responded the second half of last season, under difficult circumstances, it's clear to me that this team believes in him and responds positively to his leadership."

Caldwell was hired by the Lions in January 2014 and immediately turned around the struggling franchise, going 11-5 in his first season. Things quickly fell apart, though, as his team was the last to get a win in the NFL in the 2015 season and started the year 1-7.

"I am obviously thrilled that I will continue to lead this football team," Caldwell said in a statement Friday. "I genuinely appreciate the faith Bob has shown in me, and I really look forward to working together.

"As I've said before, I truly love coaching the Lions and, while I've only been here two years, I have grown to love our fans, the City of Detroit, and the people of Detroit and Michigan. Their loyalty and passion is incredible and we want nothing more than to bring them a championship."

Earlier this season, Lions owner Martha Firestone Ford, in the only time she has taken questions from the media since taking over ownership of the franchise after the death of her husband, William Clay Ford Sr., in 2014, expressed a fondness for Caldwell. She called him a "great guy" and "absolutely a wonderful coach."

The Lions' 1-7 start led to the firings of team president Tom Lewand and general manager Martin Mayhew and had Caldwell on the hot seat for the remainder of the season. Team president Rod Wood, who replaced Lewand, said for months that the team's new general manager -- Quinn was hired Jan. 8 -- would decide on Caldwell's future.

Caldwell has an 18-14 mark with the Lions -- the only Detroit coach in the Super Bowl era to go through his first two full seasons with an above-.500 record. In five seasons as an NFL head coach, Caldwell is 44-36 with three playoff appearances, going 2-3, including a Super Bowl appearance in 2009 with Indianapolis.

He led the Lions to a wild-card berth in 2014, and Detroit led in the fourth quarter before a controversial officiating decision turned the momentum of the game. The Cowboys beat the Lions 24-20. This led to high expectations in Detroit entering the 2015 season, but the Lions failed to meet them.

Many Detroit players came to Caldwell's defense toward the end of the season, including free-agents-to-be James Ihedigbo and Darryl Tapp. Perhaps the strongest voice came from star receiver Calvin Johnson, who said he loved playing for Caldwell. Johnson announced last week he is contemplating retirement.

"Love him," Johnson said last month. "Everybody in the locker room would probably say the same thing. He commands respect, but he doesn't have to do much. It's just his character. Guys gravitate towards [him].

"Easily one of my favorite coaches I've had come through."

Caldwell's staying with the Lions likely means the team will keep the majority of the coaching staff intact, including offensive coordinator Jim Bob Cooter, who had helped Matthew Stafford to the most consistent stretch of his seven-year career during the second half of 2015.

In one of Caldwell's bigger moves in 2015, Caldwell promoted Cooter to offensive coordinator after a Week 7 loss to Minnesota that sent the Lions to 1-6. He fired Joe Lombardi, who was hired when Caldwell took over in Detroit in January 2014.

In addition, the Lions hired Kyle O'Brien as the team's director of player personnel, the team announced Friday. O'Brien, who was theJacksonville Jaguars' director of college scouting for the pastthree seasons, also spent 10 season with New England in its personnel department -- at the same time as Quinn -- as well as a season with Kansas City.

It is unclear what O'Brien's hire means for Sheldon White, who was the Lions interim general manager until Jan. 8. White's role before that had been vice president of pro personnel.