Devonta Freeman should be paid like a 'top-three back,' agent says 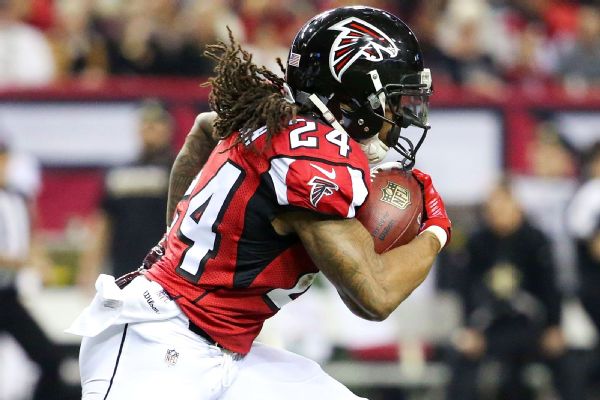 Devonta Freeman's agent says her client should be paid "like the elite back he is," arguing that the Atlanta Falcons star is one of the NFL's three best running backs despite getting "significantly less opportunity."

Agent Kristin Campbell, in an interview with NFL.com, said she will press the Falcons to sign Freeman to a contract extension this offseason.

"It's time for the Falcons to pay him like the elite back he is," Campbell told NFL.com, which published a report on the interview Monday. "I expect them to make him a priority this offseason, as he's been an integral part of the dynamic offense that has gotten them to the Super Bowl."

"I'm not even thinking about that right now, that's the business side of it," Freeman said. " ... I'm just here trying to enjoy this moment, here with my brothers."

Freeman, 24, has been selected to the Pro Bowl each of the past two seasons. He rushed for more than 1,000 yards for the second consecutive season in 2016, averaging 4.8 yards per carry and scoring 13 touchdowns.

The Falcons have used Freeman as the lead back in a time-share situation with Tevin Coleman, who gained 941 yards from scrimmage and scored 11 touchdowns this season.

Freeman, who will make a base salary of $690,000 in the final year of his rookie contract in 2017, told NFL.com that he was "struggling" with sharing playing time with Coleman.

"I'm certainly struggling with it, just because I'm a competitor," Freeman said. "I just want to be around the ball as much as I can, to help the team win.

"Now we're in the Super Bowl, and this is a once-in-a-lifetime opportunity. I don't know how many carries or touches I'm gonna get going into this game, but I'm gonna try to make the most of every opportunity I get."

Campbell stressed on multiple occasions that Freeman is a "top-three back."

"During the season it has been frustrating for Devonta," Campbell said. "He has been trying to establish himself as a top-three back in the league, and yet when you look at his snaps, he gets significantly less opportunity than the others vying to be in that category.

"Yet he has made his case nonetheless. He is versatile. He's durable. He's productive. And he's a team player -- he has played his role and helped his team go to the Super Bowl. Despite not being able to get the notoriety we all would have wanted for him this season, I think a serious argument can be made that he is a top-three back, and he should be compensated accordingly. Over the offseason, the priority is getting something done. And if not? Hey, we've been underestimated before, but sometimes when you get underestimated, people end up having to pay."

Freeman would not comment Monday night when asked whether he knew Campbell was going to discuss his contract situation with NFL.com, saying only that he is "thankful to be here."

"We're extremely encouraged by Devonta, as a player and a person on this team," he said. "And people like Devonta are the guys we want to be here for a long time."