Doc Rivers brought to tears, says mother could have consoled him 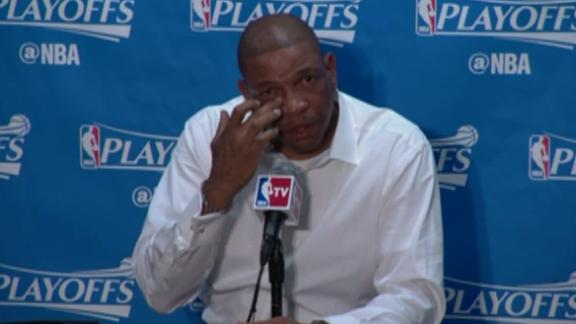 LOS ANGELES --Clipperscoach Doc Rivers' eyes welled and he became choked up before his team played the Portland Trail Blazers in Game 5 of theirfirst-round series.

During his pregame availability Wednesday night, Rivers was asked whom he leans on to get through after losing injured stars Blake Griffin and Chris Paul.

Rivers responded "I don't know," and his eyes filled with tears. He paused and put his hand to his face. The 54-year-old coach told the media that his emotional reaction wasn't in response to the reporter's question then mentioned his late mother, Bettye Rivers.

"I'm not crying over being discouraged," Rivers said as he fought back tears. "[The question] made me think about my mom. That would have been the person."

Bettye Rivers died in June in Maywood, Illinois, the Chicago suburb where Rivers grew up and starred at Proviso East High School. She was 82.

Rivers stared straight ahead in the quiet room before getting up and walking out.

The Clippers lost to the Trail Blazers 108-98 and trail in the series 3-2. Griffin is out for the season after aggravating a quadriceps injury, while Paul broke his hand in Game 4 on Monday.

In 2008, Rivers had guided the Boston Celtics within a game of the NBA championship when he had a similar emotional reaction involving his father. He choked back tears thinking of Grady Rivers, who died during that season. The Celtics clinched their 17th title two days later by beating the Lakers on Father's Day.

Grady Rivers had juggled his schedule as a Chicago police lieutenant so he could watch his son's games. He had coached his son's baseball team and watched him become a prep star who went on to college success at Marquette before playing in the NBA.

At the time, Doc Rivers said his father was a tough subject for him to discuss. He hadn't had time to reflect on his father's death during that season, but he said he thought about him often.

Rivers and his wife, Kris, have two grown sons and a daughter who frequently attend Clippers games. Austin Rivers is the first player in NBA history to play for his father.

"I think at this time it's important for the family to have his back," Austin Rivers said. "It's a stressful time. Obviously we had high hopes and two of our best players go down just like that, but we're still in this series."

ESPN's Arash Markazi and The Associated Press contributed to this report.