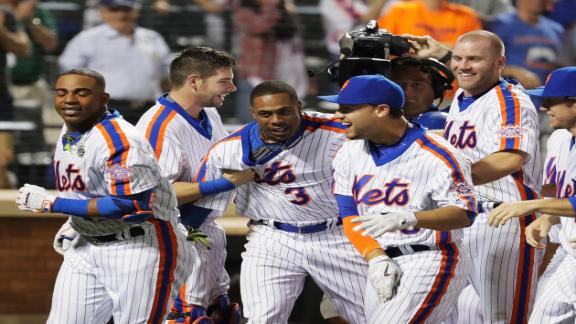 NEW YORK -- The first teenage starter in 11 years failed to get through three innings Friday, when Los Angeles Dodgers rookie Julio Urias departed after 2 innings against the New York Mets.

But the short outing mattered little to Urias.

"I'm not going to lie. When I went out there, I started thinking of everything I had to go through to get here," he said, speaking through a translator after the Dodgers' 6-5 loss.

"I will never forget anything that happened in this game because this is the happiest day of my life."

A fill-in starter for Alex Wood, who is dealing with minor triceps soreness, the 19-year-old Urias brought a 27-inning scoreless streak at Triple-A into the outing. It did not continue; Urias gave up three runs in the first inning.

Neil Walker delivered the first run off the left-hander with an RBI single, and Juan Lagares followed with a two-run double. Both RBI hits came with two outs.

Urias quickly realized the big league batters are much better than their Triple-A counterparts.

"They're looking for specific pitches, and sometimes I tried to fool them and I wasn't able to," he said.

Urias walked one batter in a scoreless second inning before walking two more and loading the bases in the third. He was replaced after just 59 minutes by right-hander Chris Hatcher, who got out of the jam with a strikeout of opposing pitcher Jacob deGrom.

All three Mets' runs off Urias were earned. He gave up five hits and four walks, striking out three and adding a wild pitch. He struggled with his control and the strike zone of plate umpire Dan Bellino, throwing 81 pitches to 17 batters, just 42 strikes, and starting 13 of 17 batters with balls, including his opening five and nine of his first 10.

"I thought some of them were in the zone," Urias said. "I have to look at the video to double-check and see if, in fact, they were strikes, and [if so], then it was a good call by the umpire."

Urias, who was limited to just 90 pitches for the game, became the first Dodgers pitcher to throw 80-plus pitches in fewer than three innings since Clayton Kershaw on June 10, 2009, according to ESPN Stats & Information.

"I think there is a reason why the team called me up," Urias said. "Baseball isn't easy, but I am going to continue to work so that next time we can get those results."

The last pitcher to start a major league game before his 20th birthday was Felix Hernandez of the Seattle Mariners. On Aug. 4, 2005, Hernandez gave up just one earned run over five innings against the Detroit Tigers, throwing 81 pitches in a game he ultimately lost.

The Mets' Dwight Gooden in 1984 remains the only teenage starting pitcher in the past 42 years to win his big league debut.

Urias became the first teenager to play for the Dodgers since Fernando Valenzuela in 1980 and the youngest starting pitcher since Dick Calmus in 1963.

"He's got four legit pitches. That's more than I have now," said Kershaw, the Dodgers' ace. "He's got the really hard slider that just shows his aptitude, can learn it in a spring training, and then his curveball still is there, too."

The Dodgers thought the poised Urias would be able to handle the outside factors that come with making a start in New York.

"I think we thought it through as an organization and we just feel good that his time is now," Dodgers manager Dave Roberts said before the game. "We believe in Julio as a player, so I think this is fun for baseball and exciting for baseball in general. For us, there is no better stage."

Urias failed to make the stage his own but did show signs of promise. He struck out the first batter he faced, Curtis Granderson.

"He didn't look rattled. He didn't look nervous by any means, especially with a packed house, on the road," Granderson said. "I thought he held his composure very well."

Urias also offered better command in the second inning. But he was missing both high and low in the strike zone, a sign his release point was not ideal.

"There were some pitches on the edges that he might be used to getting the call," Roberts said. "But he wasn't wild; I think he was just missing and getting behind. I thought his fastball was good and fastball command might be a tick off. There were a couple of seeing-eye hits, a couple of balls hit decent, but you know what, a debut for Julio -- I thought he did well."

Even before the outing, the Dodgers were noncommittal about having Urias start again. Wood is expected to return to the rotation Monday at Chicago against the Cubs. With Mike Bolsinger recently added to the roster, the Dodgers are carrying six starters.

"I think that going forward, we have obviously said from the beginning, us as an organization, we're going to monitor his innings," Roberts said before the game. "He's at 90 pitches tonight, and after tonight we'll all sit down and evaluate going forward what is best for Julio as well as the organization."

The Dodgers were not worried that a poor showing in his debut would set back Urias' development.

"I have been around some really good young pitchers who have immediately hit the ground running, and I have been around really good young pitchers who have taken some time to feel their way through it," president of baseball operations Andrew Friedman said. "We will continue to read and react as long as Julio is up. And when he is back down, do everything we can to continue to put him in the best position to succeed for the long term."

Urias' debut spoiled by Mets
In Julio Urias's major league debut, he is tagged for three runs over 2 2/3 innings against the Mets.