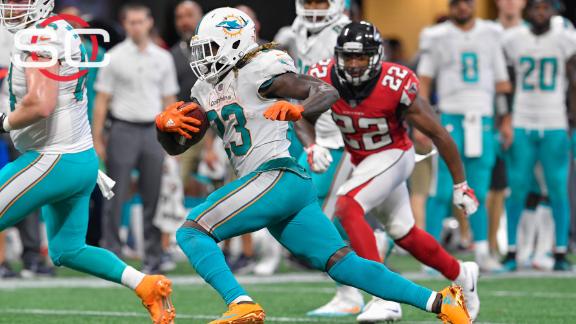 The Miami Dolphins have traded running back Jay Ajayi to the Philadelphia Eagles for a fourth-round draft pick, it was announced Tuesday.

The NFL's trade deadline was 4 p.m. ET on Tuesday.

The Dolphins traded Ajayi because they believe that his most productive games are behind him, fearing that knee issues stemming from a significant 2011 surgery are finally catching up to him, team sources told ESPN's Jeff Darlington.

"I'm not concerned about any reports other than the ones given to us," Eagles general manager Howie Roseman said when asked about Ajayi's knee issues, saying the team was comfortable in making the trade based on the results of the running back's physical.

There was no conflict or controversy that led to Ajayi's trade, sources told Darlington, but Ajayi did express some frustration about his lack of touches in the red zone.

If the 2016 Pro Bowl selection regains his form, Ajayi is likely to emerge as the No. 1 back for the Eagles (7-1). Roseman, however, saidLeGarrette Blountwill remain the starting running back for an Eagles offense that already ranks third overall in production at the midpoint of the season.

Roseman left the ultimate call on the team's depth chart to the team's coaches.

"He's a warrior, he's a two-time Super Bowl champion, and we're really glad to have him," Roseman said of Blount, adding that the Eagles are "really counting on LeGarrette going forward."

"This is no reflection of any of those running backs. This is a good opportunity for the Philadelphia Eagles, and our job is to add good playerswho fit what we do, and we feel like Jay Ajayi did that."

By acquiring Ajayi, the Eagles address both an immediate and longer-term need. The ground game hasn't exactly been a problem -- Philly ranks fourth in the NFL in rushing yards per game (129) -- but second-year back Wendell Smallwood has been too inconsistent to be relied upon to share the load with Blount.

The biggest issue for the Eagles has been pass protection. When Darren Sproles suffered season-ending injuries in Week 3, they lost their best pass-pro back. Nobody has fully stepped into the void in the weeks since. Ajayi should give them an upgrade in that department, with Blount's carries sure to take a hit.

The move comes four days after coach Adam Gase said the Dolphins had "the worst offense in football"after the team's 40-0 loss to the Baltimore Ravens on Thursday night. Miami ranks last in the NFL with 252.4 yards per game.

Ajayi was selected to the 2016 Pro Bowl after finishing fourth in the NFL with 1,272 rushing yards, the third-highest season total in Dolphins history.

He had an early run-in with Gase when he expressed displeasure about not winning the starting job over Arian Foster at the beginning of the 2016 season. Ajayi was kept home before Miami's Week 1 road game against the Seattle Seahawks.

However, Ajayi came on strong after the incident and helped propel the Dolphins' playoff run that included winning nine of their last 11 games. Ajayi had three 200-yard games during that stretch.

The Dolphins likely will turn to 2016 third-round pick Kenyan Drake as their starter. Drake has just 25 rushing yards this season on 10 carries.

Roseman is trying to surround Eagles quarterback Carson Wentz with players who will be with him over the long haul. Just 24, Ajayi has the potential to fit that bill, and Roseman saw that during the team's joint practices with the Dolphins in August.

"When we came back after those practices, we said, 'That's our guy,'" Roseman said. "He has the mentality we're looking for. He brings the kind of presence and plays the way we want to represent our football team with and our fans with. That's one of the benefits of having these scrimmages. When [the trade] came about, we had done our homework."

That's why pairing him with Blount makes sense, even though they have similar styles. Blount, 30, is on a one-year deal. Ajayi's rookie contract runs through 2018, and he can be in Philly well beyond that if everything works out.

In the meantime, the Ajayi-Blount backfield promises to be one of the toughest in the league. According to Pro Football Focus, Ajayi ranks first (81) and Blount third (69) in most forced missed tackles since 2016.

Overall, Ajayi has rushed for 1,924 yards and nine touchdowns in 31 games for Miami since being selected in the fifth round of the 2015 NFL draft out of Boise State.

ESPN's Tim McManus and James Walker contributed to this report.