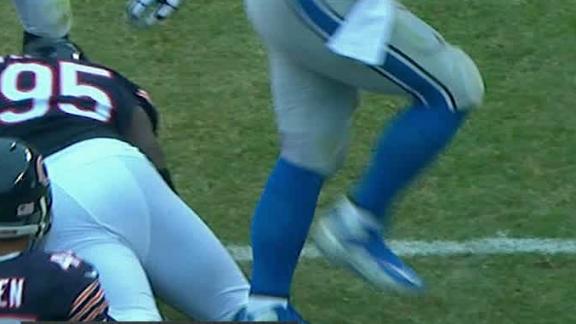 ALLEN PARK, Mich. -- The NFL has suspended Detroit Lions center Dominic Raiola for one game without pay for violating the league's safety-related rules, meaning he will miss the Lions' NFC North title game against Green Bay on Sunday.

Raiola stepped on the ankle of Chicago Bears defensive lineman Ego Ferguson during Detroit's 20-14 win against Chicago. It was a move Raiola called unintentional at the time, and he apologized to Ferguson after the game.

The NFL apparently saw it differently, as Merton Hanks, the league's NFL vice president of football operations, suspended Raiola on Monday for Sunday's game. The NFL said this is Raiola's sixth "safety-related rules violation since 2010."

Sources told ESPN.com that Raiola plans to file his appeal, which would be heard by appeals officers Derrick Brooks or Ted Cottrell, on Tuesday afternoon. If Raiola doesn't win his appeal, he will miss Sunday's game, and rookie Travis Swanson will likely start in his place.

Lions coach Jim Caldwell said they will have varying options if they must play without Raiola on Sunday, but one of the likely scenarios would be playing Swanson at center against the Packers. Swanson was a third-round pick out of Arkansas in May and started three games for the Lions when right guard Larry Warford missed time with a knee injury.

Raiola would be reinstated on Dec. 29 and is not allowed at the team's facilities for any reason -- and cannot go to team meetings or events -- during his weeklong suspension.

"Obviously, I took a good look at it, both the coaches and also the television copy as well," Caldwell said earlier Monday. "I believe what Dom told me, that it was inadvertent, but I can also see why obviously it's being reviewed by the league and everybody's taking a real good look at it. You can also see the other side of that as well."

The Lions (11-4) and Packers (11-4) both already have secured playoff spots, but the winner of Sunday's game clinches the NFC North division title and could potentially get a bye into the divisional round as well. Detroit won the previous meeting this season and would win the division in the event of a tie Sunday at Green Bay.

Caldwell said he spoke with Raiola on Monday morning but didn't want to get into details of the conversation between the two.

"It's like anything else, when it's a tough situation to deal with, you're not feeling real good," Caldwell said. "I think that's obvious."

Raiola also explained to Chicago offensive lineman Roberto Garza, a friend of Raiola's, what happened and wanted to reiterate he didn't mean to do that intentionally.

"I apologized at the end of the game, told [Ferguson] it was unintentional, and we shook hands and that was it," Raiola said.

After Sunday's loss, Ferguson did not want to get into what Raiola said to him after the game.

"None of that matters," Ferguson said. "We all saw the play. You can't take back what happened with that play. That's the end of that."

Raiola was fined $10,000 earlier this season for unnecessary roughness when he clubbed New England defensive lineman Zach Moore in the back of the head.

"One game, one game, one game? That's terrible," Marshall said. "I don't even know Ego's injury. Is he OK? What if he broke it? What if he broke his ankle? If he breaks Ego's ankle, and Ego never plays again, how much money does that guy miss out on? This is what he does for a living. This is what he's done all his life. He's what, 22, 23? He doesn't even know his purpose yet. He doesn't even know what he's gonna do after football. He's still figuring out what life is about. ...

"He should be banned from the NFL. A couple years ago, you guys know that I advocate for mental health. So two years ago ... see, a lot of people [ask], why do you call Detroit [Chicago's] little brother? I apologize again, Detroit. I retract that statement. But I was really mad at him because in the game, I'm just warming up, I'm just standing there. He's like, 'Go take your medicine. Go do this you freaking weirdo, you freaking crazy guy. Go take your medicine.'"

Raiola Suspended One Game For Stomp
Adam Schefter has the latest on Lions center Dominic Raiola, who has been suspended one game without pay for stomping on the ankle of Bears DL Ego Ferguson.