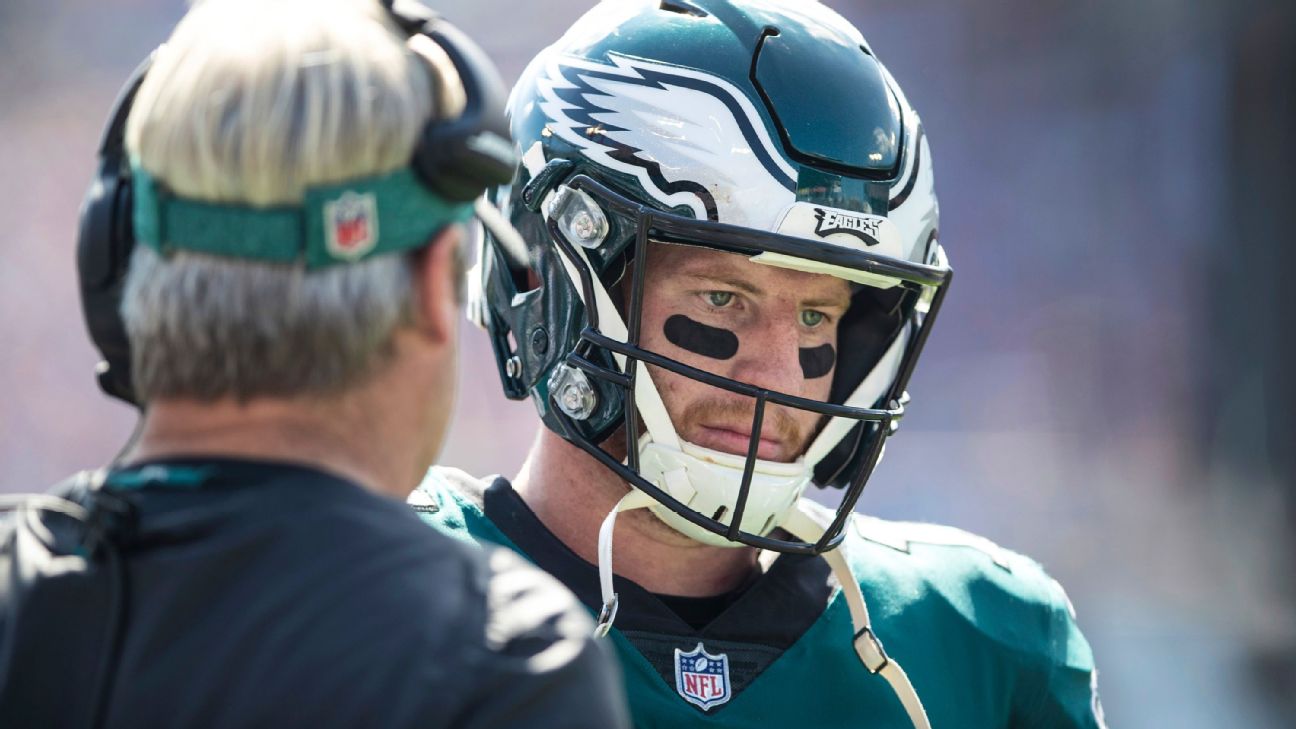 Sunday's 23-21 loss to the Minnesota Vikings not only dropped the defending champs to 2-3 but revealed what can be viewed as cracks, depending on your vantage point, including teammates arguing and players questioning the playcalling.

"I see guys that are battling their tails off and competing with one another to play. I see their frustration like our frustration when things don't go our way, and I see leaders on the football team standing up and leading, and that's what we need right now. We need those guys," Pederson said.

There has been no shortage of controversy lately. Midway through the third quarter, defensive teammates Fletcher Cox and Jalen Mills had a heated exchange. Mills was facemask-to-facemask with Minnesota receiver Adam Thielen following a pass breakup on third-and-goal. Cox moved in and gave Mills a shove before pointing him to the sideline, prompting Mills to lightly shove him back.

"That was all great words. I think the ref was getting ready to throw the flag and I was a great teammate, I went in there and pulled him out of the scuffle to not cost the team 15 yards and get him to the sideline," Cox said. "I was just telling him to be smart."

After the game, a couple of players voiced their dissatisfaction with coaching decisions. Running back Jay Ajayi expressed his belief that they should have established the run more, especially early. Only four meaningful running plays were called in the first half as the Eagles fell into a 17-3 halftime hole.

"With the offensive line we have on this team, running the ball like that, that doesn't make sense to me," he said.

Stefen Wisniewski was replaced at left guard by Isaac Seumalo prior to the Vikings game, and he said that his benching was not related to his level of play.

"I'm going to be honest. I've been playing pretty well," he told the Philadelphia Inquirer in the locker room postgame. "I really don't think that was it. I have some theories, but I'm not going to share those publicly. ... It's frustrating. If I wasn't a Christian, I'd probably be losing my mind."

"I have no idea what the other theory [for his benching] would be," Pederson said, "because everything in this business is performance-based."

The feel surrounding the Eagles through five games is much different than a year ago. There was little evidence of internal turmoil during their touchdown-celebrating, teammate-backing romp through the regular season en route to a championship.

"You'd probably have to ask them, quite honestly, because I'm over it," Pederson said, when asked if the players are suffering from a Super Bowl hangover. "I'm trying to fix our problems currently. It seems like we're trying to move on and move past, but we kind of keep getting compared to last season. This is a totally new season, new team, everything about it as we are finding out. And so we have to fix today."

The Eagles have already matched their loss total from last season, and the frustrations are starting to surface. Pederson, though, does not see discord in the actions of Cox or the words of Wisniewski and Ajayi, but signs of promise as they set their sights on Thursday's game at the New York Giants.

"We're sitting here at 2-3, we're 0-0 in our division with an opportunity this week to make some hay there, and we're looking forward to this week and moving forward," he said. "But our guys are competitive -- I think that's the culture we've created. If we didn't have that, quite honestly, there would probably some more issues going on. But the fact that the guys want it so bad and they're standing up and holding each other accountable, I think that's a credit to the players."