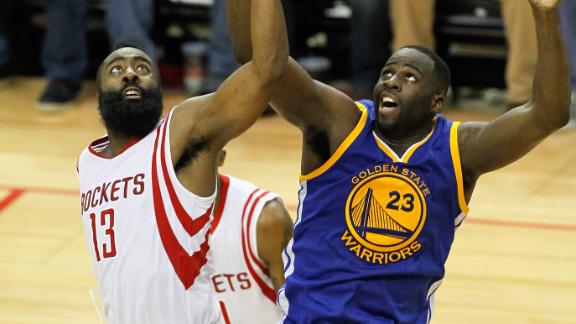 Draymond Green and Klay Thompson will be joining reigning MVP Stephen Curry to give the Golden State Warriors a trio of All-Stars for next month's midseason NBA showcase in Toronto.

The coaches' choices for the reserves were announced Thursday on TNT, a week after the starters as voted on by fans were revealed, with the Western Conference team anchored by Curry.

The additions of Green and Thompson give the Warriors three All-Stars for the first time in 40 years.

The rest of the reserves for the West, to be coached by Gregg Popovich, for the Feb. 14 game:

The Eastern Conference coaches left Kevin Love of the Cleveland Cavaliers out of their choices, opting instead for a frontcourt of reserves anchored by Andre Drummond of the Detroit Pistons.

The rest of the East team, to be coached by new Cavs coach Tyronn Lue:


The reserves were selected by the head coaches in each conference, who had to vote for seven players: two guards, three frontcourt players and two additional players at any position. The coaches weren't allowed to vote for players from their own team.

Green, who leads the NBA with eight triple-doubles, is a first-time selection, and Thompson was selected for the second year in a row. The Warriors have three All-Stars for the first time since Rick Barry, Phil Smith and Jamaal Wilkes in 1976.

"It's definitely something I could've never imagined happening," Green said during an interview with TNT. "It's been a lifelong dream of mine to one day see that happen, but I could never imagine it happening like this."

Along with Green, Drummond and Thomas also were selected by coaches for their first All-Star Game. Drummond tops the league in rebounding and double-doubles, and Thomas, the 60th and final pick in the 2011 draft, is among the NBA's top 12 in scoring and assists.

Bosh will return to his original NBA city after being chosen for his 11th consecutive All-Star Game, trailing only the Lakers' Kobe Bryant(18 straight)and Cleveland's LeBron James and Miami's Dwyane Wade(both with 12 straight) among active players. Paul is an All-Star for the ninth straight year.

DeRozan earned his second All-Star selection. He said it was a big moment because of how much pride he has in playing for the Raptors, who won their 10th straight Thursday night.

"And now to have the All-Star Game here and have two guys participating, it doesn't get much bigger than that," DeRozan said, referring to teammate and All-Star starterKyle Lowry. "It's definitely a blessing."

DeRozan, who was also an All-Star in 2014, said this year's selection was especially sweet coming off a season in which he missed 21 games with a torn groin.

"Words can't explain it, especially with the rough time I had last year, going down with the injury," DeRozan said. "But everything is a process. Nothing was ever given to me. I had to work for every single thing I accomplished, individually and team-wise. It was rough, but I think that's made me into the person and player I am today."

West coaches passed on Damian Lillard, who is in the NBA's top seven in scoring and assists for a Portland team that is surprisingly in playoff position.

The West starters, meanwhile, were highlighted by the landslide selection ofBryantfor an 18th time.

Previously voted as starters in the East were James, Wade, New York's Carmelo Anthony, Indiana's Paul George and Lowry. DeRozan and Lowry are the first starting backcourt to play an All-Star Game in their home city since the Los Angeles Lakers' Jerry West and Gail Goodrich in 1972.

James was the top fan choice for the East team with 1.1 million votes.

Any player who has to withdraw from the All-Star Game because of injury would be replaced by a player chosen by NBA commissioner Adam Silver. If a starter is injured, Popovich or Lue would select the replacement in the lineup.