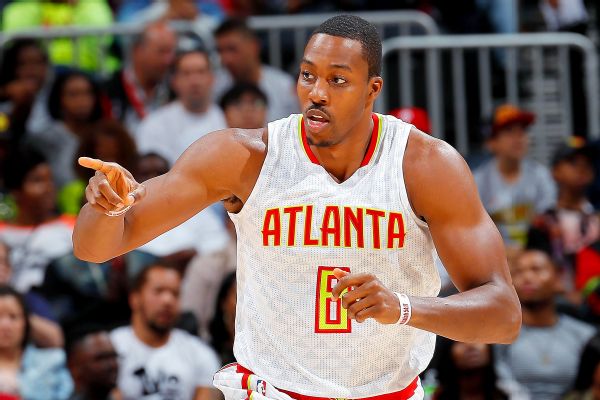 Hawks center Dwight Howard was ejected late in the fourth quarter of a key early-season Eastern Conference game in Charlotteafter throwing an elbow at the head of Hornets center Cody Zeller.

Friday night's game, a 100-96 Hawks loss, turned with 5:38 remaining when Howard delivered an intentional elbow to Zeller's face and received a flagrant foul 2.

Howard, who had 10 points and 18 rebounds after missing the previous game due to a quad injury, had been a key factor up until that point, but the Hawks seemed to collapse without him. Atlanta led by three at the time of Howard's ejection. The Hornets scored the next nine points and went on to snap Atlanta's six-game winning streak.

Before the possession that ended with the hit on Zeller, Howard appeared to get frustrated with him at the other end of the court when he got boxed out on a free throw.

"It wasn't like I tried to hit him in the face," Howard said after the game, "but my job is to protect my house at all costs. I am making no apologies for it. I can't do nothing but live with it."

Asked if he thought the foul was flagrant, Howard responded, "It's basketball."

Zeller said after the game he didn't think Howard's elbow to the face was a dirty play.

"I have taken a lot of hard hits with two older brothers," Zeller said. "I knew it was going to be a physical game. But it was a huge play in the game because they couldn't go to him late in the game and we went on a run."

Paul Millsap, who led the Hawks with 22 points and 13 rebounds, said the ejection fueled the home crowd.

"Plays like that are momentum shifts," Millsap said. "It kind of sparked them. They took that and added fuel to the fire."

Information from The Associated Press was included in this report.