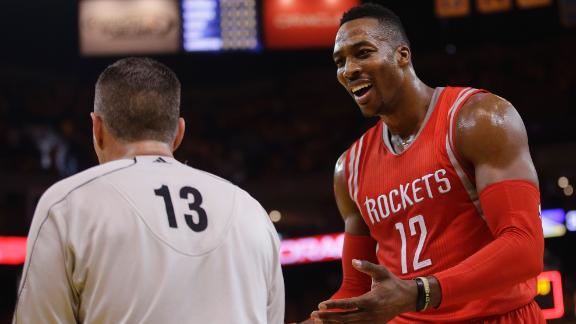 Fans knew that Houston Rockets center Dwight Howard was battling a knee injury in last season's Western Conference finals, but according to Howard, the injury was worse than many people thought.

Howard appeared Thursday on the Houston Texans pregame show on SportsRadio 610 and said he played through a torn MCL and meniscus during the five-game series loss to the eventual NBA champion Golden State Warriors in the spring.

"I was basically playing with a torn MCL and meniscus," Howard said. "I never said anything about it. I tried to cover it up saying it was a sore knee. But I was in pain the rest of the series. I just looked at it like, man, you just never know if you will ever make it back to this moment. So just sacrifice your mind, your body and your spirit for your teammates and the city and hope for the best.

"You know when we lost it was like, man, I gave everything that I had. And it hurt, but we can make up for it this season."

According to a source, team doctors said Howard did not need offseason surgery because the tears weren't that severe.

Howard hurt his left knee in the first quarter of Game 1 of that series when his then-teammateJosh Smithcrashed into his knee. He was questionable for Game 2 with what was then called a sprained knee. He ended up playing 40 minutes, finishing with 19 pointsand 17 rebounds. He played in the remaining three games of the conference finals, averaging 14.4 points and 14.4 rebounds for the series.

During training camp practices, coach Kevin McHale said the team will monitor the amount of time Howard spends on the floor and is examining how many minutes he should play once the regular season begins.

McHale has said the Rockets don't want Howard to endure the same physical problems he experienced last season, when he missed a career-high 41 games due to a variety of injuries -- including 26 games with swelling in his right knee.