Dwyane Wade wins in Miami return: 'Couldn't wait until it was over' 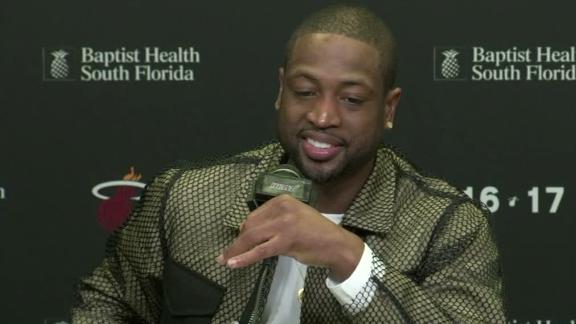 MIAMI -- Chicago Bulls guard Dwyane Wade had 13 points, 7 rebounds and 4 assists in a 98-95 win over the Heat on Thursday night, his first game against Miami since signing with Chicago over the summer.

"Worst basketball game I ever played in my life," Wade said with a chuckle. "I couldn't wait until it was over. It's just weird. You're going against guys -- it just seemed like we were just playing in the playoffs together.

"Just a good environment though, man. The fans were great. I appreciate the ovation, the cheers. The things that they were saying, I appreciate it all. But the game itself was weird."

Wade, who spent 13 seasons in Miami, spoke openly in recent days about how much he wanted to win this game. It marked the Bulls' only regular-season appearance in Miami. After struggling to find his rhythm throughout the night, Wade calmly drained two free throws with 13.7 seconds left that helped secure the Bulls' victory. His teammates and coaches said they were happy he was able to earn a victory against his old team.

"He's so calm about it," said Bulls All-Star swingman Jimmy Butler. "Nothing gets to him. He came in here to do a job, and he got it done. You know, emotions are rushing, but he's a professional, Hall of Famer, but he doesn't show it. He goes out there and competes, plays basketball the right way and leads us to victories. That's what you ask from him each and every day, and he brings it each and every day, and I'm glad we got this one for him."

Butler was one of several teammates who spent part of the day hanging out at Wade's mansion, relaxing before one of the most hyped games of the regular season.

Wade received multiple standing ovations before and during the game. The first came during the player introductions, when the American Airlines Arena crowd cheered loudly as Wade's name was announced. Wade was given another standing ovation at the end of the first quarter, when a tribute video played on the big screens in the arena.

Wade, who sat quietly at the end of the bench as the video played, walked back onto the floor after the video ended and blew kisses to the crowd. Fans continued cheering and chanting "D-Wade! D-Wade!"

"It was more so seeing so many familiar faces that you've been seeing for years sitting in certain seats," Wade said. "People that before certain games like to give you eye contact, like to do their own ritual with you ... that was probably the thing that was the weirdest, being on the other side of the lens. The video was cool, but we were already in the game.

"I'm glad [this game] is over with. When I first looked at the schedule, I was like why so early? I'm glad it's over early so we can focus."

After the game ended, Wade shook hands with former teammates and Heat personnel. He walked off the floor to loud cheers with a sign in the stands just above him that read: "This will always be Wade County."

Now Wade and the Bulls can move forward as they get set for a two-week-long, coast-to-coast road trip that starts after a Saturday game at home against theWashington Wizards.

"I can only imagine what he was going through today with all the emotions coming back here," said Bulls head coach Fred Hoiberg. "I thought he handled it great. It was a really cool moment for him with the video tribute and on the floor. It was great for him, and it was great for Miami. ... Dwyane, obviously, [this] was a very important game for him."