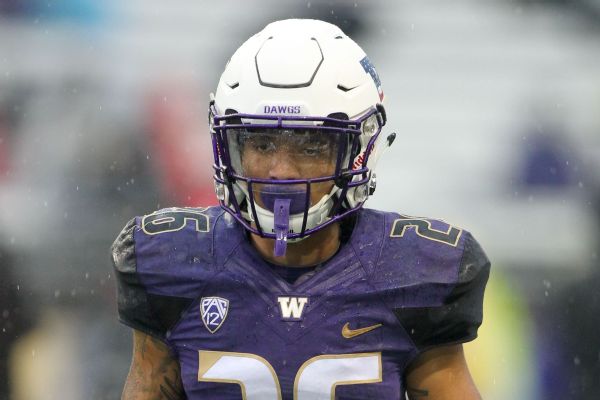 ESPN
By Tim McManus
PHILADELPHIA -- The Eagles medical staff went beyond just cornerbacks, and even football players, when researching the recovery rate for athletes who rupture their Achilles tendon.

Executive vice president of football operations Howie Roseman said the study included "guys playing explosive positions, quick-twitch positions" in a variety of sports to see how they bounced back. The results were encouraging, which is part of the reason they felt comfortable drafting Washington cornerback Sidney Jonesin the second round of the NFL draft with the 43rd overall pick.

"Because of his age (20 years old), it's a very, very high percentage. Coming back to 100 percent is an extremely high percentage," said Roseman, "and that's why we made the pick. For us, it had to be a very, very good chance that he would be exactly what he was before the injury. There's no insurance that will happen, but we feel very confident based on all the studies we've done, all the research we've done and the MRIs that have come back to us, that that's going to happen with him."

Jones was a favorite to be chosen by the Eagles at No. 14 overall before he tore his left Achilles tendonat his pro day in March. The injury sent him tumbling down draft boards and scared offsome evaluators. A handwritten letter from Eagles senior director of college scouting Anthony Patch, who was in attendance the day Jones got hurt, offered the cornerback some assurance that at least one team was still very much in play.

"It was a heartfelt letter. I immediately replied when I got it. I thought that was very awesome. Just from there, I knew that they still had interest," Jones said. "I had a feeling deep down. ... I just had a feeling it would be Philly if I was still there."

According to a league source, the Eagles were the team that "put the most time into him" during the pre-draft process.

Now that they have him, they'll have to show some patience. Speaking to ESPN's Matt Bowen in April, Jones said he would be back on the field in six months, as doctors told his camp that he'll be able to play "by the end of October at the latest." The message coming out of the Eagles' NovaCare Complex headquarters on Friday, however, was that the team would take a conservative approach.

"We don't know that timetable, and to be fair, we just want to make sure that he's healthy and ready to go," said Roseman.

Jones (6-foot, 186 pounds) was a first-team All-Pac 12 selection last season. He posted eight interceptions and 21 passes defensed in his three years with the Huskies. He was considered one of the top corners in a loaded class before getting hurt, and believes he'll regain that form before long.

"I don't believe I should have any problem with coming back" he said. "It's just a roadblock, and it's going to be a good story at the end of my career, and I'll look back at it as a positive. So that's how I'm viewing everything."
Related topics:
sportsespnsidney jonesnfldraftphiladelphia eagles
Copyright © 2020 ESPN Internet Ventures. All rights reserved.
More Videos
From CNN Newsource affiliates
TOP STORIES