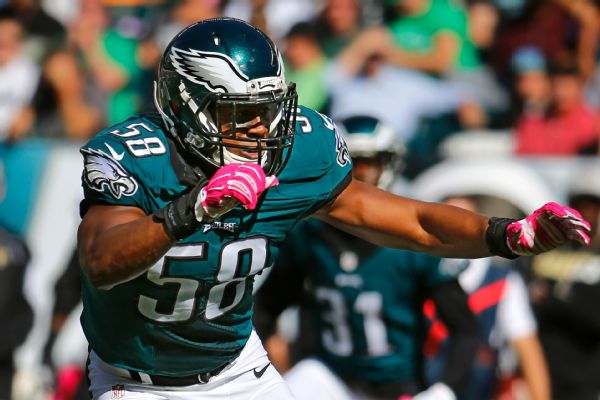 Eagles head coach Doug Pederson confirmed on Monday that middle linebacker Jordan Hicks broke a bone in his hand while on his honeymoon earlier this summer, an injury that required a "minor procedure." Hicks will be limited to start training camp.

"He's a veteran player, understands his role, I'm not going to rush him out there and try to reinjure that thing," said Pederson, who stated that he doesn't expect his linebacker to miss any time.

Hicks' injury reportedly occurred while getting out of a pool during his honeymoon in Greece in late June.

Hicks missed half of his rookie season in 2015 with a torn pectoral muscle. He also dealt with significant injuries at the University of Texas, including a torn Achilles, a hip flexor and a fractured foot.

Hicks, 25, was able to play all 16 games last season and established himself as a foundational piece of the Eagles defense. He had 85 tackles, five interceptions, a sack and 11 passes defenses while manning the middle for defensive coordinator Jim Schwartz. His five interceptions led the team and were the most among NFL linebackers. He now has seven picks in 24 professional games.

Pederson added that wide receiver Jordan Matthews could be limited in the early stages of training camp as well as he continues to deal with knee tendinitis.

"I'm not concerned. I know Jordan's work ethic, I know the type of person and player that he is, and we've just got to stay on top of it, obviously," Pederson said. "He's been rehabbing all spring, all summer ... just another one that we'll monitor as we go."