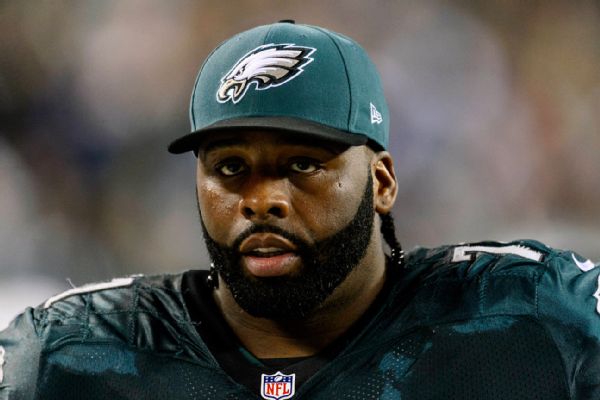 His contract now runs through 2019. According to ESPN's Adam Schefter, $15.5 million of the $32.5 million due to Peters over the next three seasons is guaranteed.

"Congratulations to Jason Peters," said Eagles coach Doug Pederson. "We're excited that he's going to be an Eagle for the next several years. His desire, and mine as well, is that he retire as an Eagle."

Speaking with reporters at the start of mandatory minicamp Tuesday, Peters acknowledged that his decision to skip voluntary OTAs earlier this spring was partly contract related.

"I don't want to be year-to-year doubting, are they going to release me? Are they going to do this? Taking pay cuts and all that," he said. "I just want to make sure that I got the reassurance that I'm going to retire here, don't have to worry about it, show up and show out."

He got his wish.

While the 35-year-old Peters had two years remaining on his original deal and was scheduled to make a base salary of around $10 million per season, the guaranteed money had all but run out. The cap-strapped Eagles approached Peters about taking a pay cut earlier this offseason, which he declined.

Peters, a nine-time Pro Bowler, has anchored the Eagles' offensive line since 2009 when he was acquired in a trade with the Buffalo Bills. He bounced back to have a strong season in 2016 after being slowed by injuries the year prior.

Right tackle Lane Johnson is being groomed to take over at left tackle when Peters does decide to call it a career. Peters didn't offer thoughts as to exactly when that will be, choosing to stay in year-to-year mode, but clearly he didn't want to spend the twilight of his potential Hall of Fame career looking over his shoulder.
Report a correction or typo
Related topics:
sportsespnextensionnflcontractjason petersphiladelphia eagles
Copyright © 2022 ESPN Internet Ventures. All rights reserved.
TOP STORIES
Fire on roof sends smoke billowing over Center City
5 hospitalized after car crashes into utility pole in Montco
After the omicron wave, what's next for the COVID pandemic?
Police investigate 2 deadly hit-and-run crashes in Philly
Car crash sends vehicle into side of home in Lawndale
CDC warns about counterfeit N95, KN95 masks
AccuWeather: Feeling Better Today
Show More
Car flips over guardrail, lands in woods in Haddon Township
Police: Man shot, killed in Philadelphia's East Falls section
All 100 lab monkeys accounted for after several escape crash
Montco health department ties 10 hepatitis A cases back to restaurant
Arnold Schwarzenegger involved in multi-vehicle crash
More TOP STORIES News