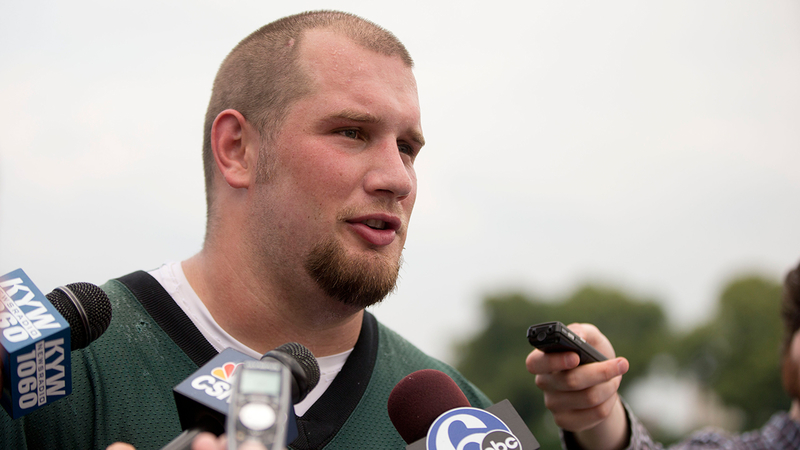 The suspension was first reported via Twitter by Wildfire Radio and confirmed by NFL Network. According to the report, Johnson is appealing the suspension.

Johnson denied the report to the Philadelphia Daily News, and his agent, Ken Sarnoff, issued a statement to ESPN on Tuesday.

"We are aware that a member of the media has started a rumor that Lane Johnson will be suspended for a PED violation," Sarnoff's statement said. "Lane has not been suspended and any report to the contrary is false. None the less we will not comment on my client's protected health information."

The Eagles have not commented.

Johnson, 26, was suspended for four games in 2014. At the time, Johnson said he had taken a prescription medication without checking with the Eagles' medical staff. The medication was on the NFL's list of banned substances.

The Eagles drafted Johnson, a 303-pound tackle from Oklahoma, with the No. 4 pick in the 2013 NFL draft. He has played in all 45 games, including a playoff appearance, he was eligible for in his three seasons with the Eagles.

When the Eagles negotiated a contract extension during the offseason, it was with the intention that Johnson would eventually move to left tackle to replace 34-year-old Jason Peters. The contract included a $10 million signing bonus and a total of $35.5 million in guaranteed money.

The Eagles have planned to replace Peters. They would have a tougher time replacing Johnson. Veterans Andrew Gardner, Matt Tobin and Dennis Kelly would be the most likely replacements. Tobin is scheduled to start at left tackle in Thursday night's preseason opener against Tampa Bay. Peters is out with a quadriceps injury.

Rookie Halapoulivaati Vaitai, a fifth-round draft choice this year, would be another possibility at right tackle. So would Allen Barbre, who has played tackle in the past, but that would entail making a change at left guard.