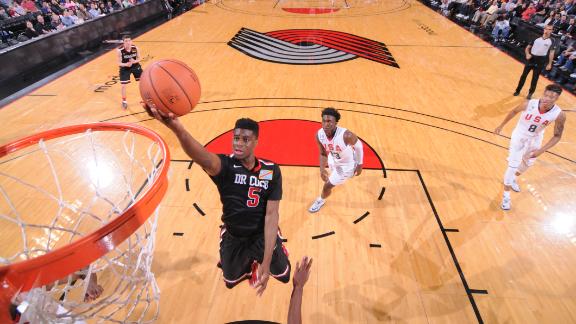 Incoming SMU freshman point guard Emmanuel Mudiay, who some believe could be a No. 1 overall draft pick, instead has decided to play overseas this season.

Mudiay had committed to play for Larry Brown over Kentucky and Kansas. Brown confirmed Mudiay's decision after the player's brother spoke to SI.com, saying, "It's all about the kid. I support the kid."

"He's the most special point guard I've ever seen at that age," Brown told ESPN on Monday. "He plays the right way, and God has given him incredible gifts. We all know [the NBA is] a point guard's league."

Asked about Mudiay being a future No. 1 pick, Brown said, "Without question. That's my hope."

A source told ESPN that Mudiay's mother and two brothers informed Brown and members of his staff in a meeting Sunday that he intended to play overseas.

"I was excited about going to SMU and playing college basketball for Coach Brown and his staff and preparing for the NBA, but I was tired of seeing my mom struggle," Mudiay's brother, Stephane, said in quotes his brother provided to SI.com. "And after sitting down with Coach Brown and my family, we decided that the best way for me to provide for my mom was to forgo college and pursue professional basketball opportunities.

"I am grateful for Prime Prep coach [Ray] Forsett for developing me into the player and man that I am, and I am also grateful for Coach Brown's guidance and his support. This has nothing to do with my eligibility in any way."

However, the athletic 6-foot-5 point guard, considered a one-and-done possibility, is concerned about amateurism issues and not academics or financial stability, the source told ESPN.com. SMU accepted Mudiay academically.

Mudiay was ranked No. 5 in the nation by ESPN.