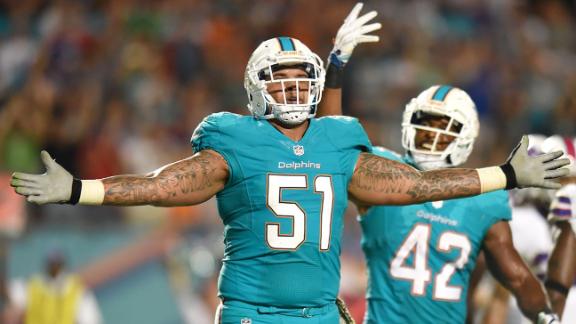 DAVIE, Fla. -- Miami Dolphins center Mike Pouncey went through a range of emotions Monday after signing his five-year contract extension. It was a reflective day and an emotional day for the two-time Pro Bowler.


Pouncey's eyes welled up as he stood at the podium and addressed the media. He knows his four-year tenure in Miami hasn't always been smooth. But Miami rewarded Pouncey on Monday with a contract that has a total value of $51.25 million, according to ESPN's Adam Schefter.

"It says a lot about them. They could have easily given up on me a long time ago," Pouncey said of the Dolphins while fighting back tears. "But they stuck with me, and that's something I will never forget. It's something that I will bring to this facility every single day."


Pouncey, 25, has not had major transgressions with the Dolphins. But little issues off the field added up.


For starters, Pouncey was prominently named in the Ted Wells report, along with ringleader and former teammate Richie Incognito, in Miami's high-profile bullying scandal involving Jonathan Martin in 2013.


In addition, Pouncey publicly supported former college teammate Aaron Hernandez with "Free Hernandez" hats when Hernandez was arrested and charged with murder in the summer of 2013. Pouncey also made an ill-timed comment on Twitter in April 2014 that rookie Ja'Wuan James will owe teammates gifts after being taken in the first round. Pouncey later said it was a joke.


But according to Pouncey, his mistakes will be left in the past. Pouncey said he was "disappointed in myself, more than anything" about his previous actions and the fact that it gave the Dolphins hesitation initially.


Pouncey, who had his parents and girlfriend in attendance, said he will mature and become the leader the team expects moving forward. He is signed through the 2020 season and will be a part of Miami's foundation for the foreseeable future.


"It wasn't just one situation. It's just stuff I wish I could have done a lot better," Pouncey said. "I can only be a leader to these guys on this football team and show the young guys the right way. Because there's a right and wrong way to do stuff. If you do it the right way, stuff comes a lot easier."