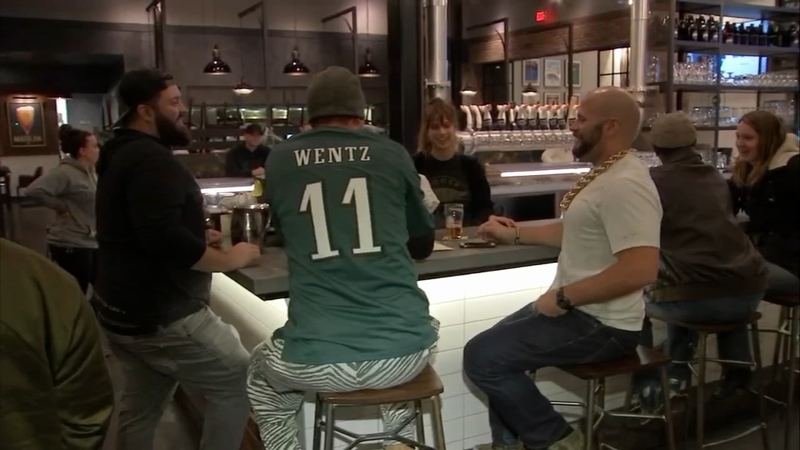 PHILADELPHIA (WPVI) -- The dust has settled and Philadelphia Eagles fans are still shaking their heads wondering how the team blew a giant lead against the Carolina Panthers and what they need to do to turn things around.
Action News made a stop Sunday evening to Goose Island Brewhouse in Fishtown, where Eagles fans were drowning their sorrows and scheming about what their Super Bowl champs should do.

Conner Fuller of Fishtown said, "Fletcher Cox said it the best - that was the worst game he's ever played. 17 point lead - it was just awful."

The Eagles blew a 17-point lead with Carolina scoring 21 points in the fourth quarter led by quarterback Cam Newton.

Brandi Johnson of South Philadelphia said, "I personally don't like Cam Newton, but I'm also respectful of Cam Newton and I knew he could make it happen."

Just after the game, emotions ran high at the Linc as fans just witnessed one of the worst Eagles losses ever.

Aniello Giuseppe of Wilmington, Delaware said, "This loss is horrible. E-A-G-L-E-S EAGLES! I bleed green regardless!"

Jason LeBlanc of Mount Holly, NJ said, "Words can't express how this feels. I don't understand why we can't close a game."

But this season, there's one thing fans keep coming back to: "This game was a little setback, but at least I saw a championship."

Fans are now turning a hopeful eye to the Eagles' next game. in London against Jacksonville. and hoping to have a tied record heading into the bye week.