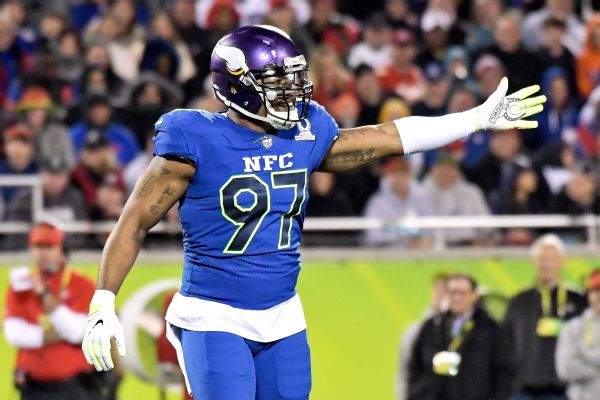 ORLANDO, Fla. --Minnesota Vikings defensive end Everson Griffen may not have been named the Pro Bowl defensive MVP, but his three-sack, eight-tackle performance certainly turned heads and suggested that this game was more than just an exhibition to players this year.

"I just came in trying to make a lot of plays," Griffen said. "I really wanted the MVP. I really wanted to win the game, but it didn't happen. I'm just blessed to be out here with some of the best players in the league and compete. It's all about competing and playing the next down, and that's what I did."

The AFC beat the NFC 20-13, but Griffen's performance, along with Washington Redskins quarterback Kirk Cousins' hustle play at the end -- in which he chased down Denver Broncos cornerback Aqib Talib after a late interception by Lorenzo Alexander--made for, many observers felt, one of the more compelling Pro Bowls in recent years.

"I feel like it was," said Griffen, who also played in last year's Pro Bowl in Hawaii. "I feel like we stepped it up compared to last year."

The Pro Bowl's on-field product has come under scrutiny in recent years, with some critics calling for the game to be scrapped altogether.

Griffen is among the contingent hoping the Pro Bowl won't go away.

Each player on the winning team took home $61,000, while players on the losing team took home $30,000. Tampa Bay Buccaneers defensive tackle Gerald McCoy said the financial element played a role in it being a competitive contest, although some have suggested more money should be involved. But he also said it was about playing the game the way it needs to be played.

"I think it was [more competitive]," said McCoy, a five-time Pro Bowler. "Definitely at the end because that money was on the line. And then the pride kicks in and guys don't want to embarrass themselves."

NFL commissioner Roger Goodell indicated to ESPN that the goal is a high-quality product while keeping the players safe.

"This is a different kind of a game," Goodell said. "This isn't a Super Bowl or a championship game. We recognize that. It's gotta be something that reflects positively on our end."

Before kickoff, Goodell said he told the players, "Have fun. Enjoy it."

Griffen dedicates Pro Bowl performance to family
After recording three sacks and eight tackles in the Pro Bowl, Vikings defensive end Everson Griffen explains what it meant for him to be a part of the game.

AFC comes out on top in Pro Bowl
It came down to one possession in the fourth quarter, but the AFC held on to top the NFC 20-13.