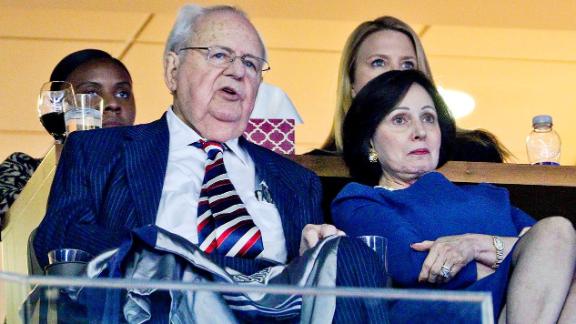 NEW ORLEANS -- New OrleansSaints and Pelicans owner Tom Benson will be required to undergo a psychiatric evaluation in response to a lawsuit filed against him by his estranged daughter and grandchildren last month.

New Orleans civil court judge Kern Reese ruled Tuesday that the 87-year-old billionaire should be evaluated by a trio of physicians (one chosen by each side, and one agreed upon by the first two doctors) by March 13. The results of that exam will help determine whether the lawsuit has merit.

The suit was filed by Benson's daughter, Renee Benson, and grandchildren Rita LeBlanc and Ryan LeBlanc after Benson cut off contact with them and decided to hand control of his vast business empire over to his wife, Gayle Benson, in the event of his death. The jilted heirs are claiming that Benson lacks the mental competency to make such decisions and that he is under the undue influence of Gayle, his third wife, whom he married in 2004.

Neither Benson nor any of his family members was present for Tuesday's hearing.

The attorney for Benson's estranged heirs, Randall Smith, said he was "delighted" with the judge's ruling.

"We just want an independent evaluation," Smith said. "That's what my clients want because they're very concerned about the health of their father and grandfather."

Benson's attorney, Phillip Wittmann, however, argued in court Tuesday that Benson's estranged heirs "don't give a damn about Mr. Benson's person. What they want is to control (his) assets."

Wittmann said after the hearing that he was disappointed that the case wasn't dismissed outright. But he said this was "just one step along the way" and that he was glad the judge proposed a "standard examination" instead of the more invasive exam proposed by the petitioners.

Asked whether he is concerned about a potential medical exam, Wittmann said, "No, because I don't think the assessment's going to show anything I haven't already said. Mr. Benson's fully capable of managing his own affairs."

Wittmann said he believes they will "probably accept" the judge's decision but have not yet decided if they will seek a review from a state appeals court. The doctors must be selected by Feb. 25 and then agree on a protocol for testing and reporting. They will be allowed to offer separate findings, if needed.

"He's made a reasoned decision to exclude his daughter and his grandchildren from his life," Wittmann said when asked by reporters to make a case for Benson's fitness. "He conveyed it to them clearly and consistently, and he's told that to everyone who's talked to him since December 27. I don't think there's any question what Mr. Benson wants to do. And he's capable of doing it.

"You've seen him at basketball games, you've seen him in public, he's able to get around and gets along pretty well, quite frankly, for a man at 87 years old. And he intends to stick with his decision."

Benson's public appearances have been limited, and he has granted only two brief televised interviews that didn't delve much into the legal proceedings. Benson also has so far declined to appear at any court hearings. And he had declined to submit to a psychiatric evaluation before Tuesday's ruling, saying he would instead be willing to meet with the judge.

Smith said in court Tuesday that was "telling and concerning," and he argued that no interdiction case has ever been dismissed without medical evidence in Louisiana. Smith told the judge that only the court could protect Benson, who is in a state of "vulnerability."

The jilted heirs have pointed to a pattern of alleged "bizarre" behavior in Benson's personal and business actions.

"We're no doctors, neither are my clients, but they see a man who, for his whole life, loved them, was with them. They were a family," Smith said after the hearing. "They were together all the time. Renee, Ryan, Rita, they all worked in the family business for all their lives and all of a sudden they're torn apart from it."

Benson's attorneys, meanwhile, have argued that Benson's decision was years in the making -- that he had repeatedly attempted to groom them to take over his businesses but they never "rose to the task." In a filing last week, they said if the hearing continues, Benson will have to "publicly identify their cruelties, inabilities and indiscretions to justify his business decisions."

Benson's attorneys have argued that the petitioners showed no cause for the "extreme remedy" of interdiction, which they said equates to a ruling of "civil death."

Wittmann argued in court Tuesday that a psychiatric evaluation would equate to a "fishing expedition" and a "shotgun search" by the jilted heirs, hoping they would find some support for their allegations.

Wittmann further argued that even if an interdiction is granted, Benson's businesses would fall under the care of Gayle Benson and Lauscha, to whom Benson granted power of attorney before the lawsuit was filed. Wittmann argued that under Louisiana law, a ruling of interdiction doesn't affect the validity of decisions made beforehand.

Smith countered that by suggesting that future hearings could decide on such matters.

"If the medical evaluation shows he doesn't have capacity then I doubt he had capacity when he did the power of attorney a month ago," Smith said.

In a separate hearing that was held last week in San Antonio, a judge appointed two receivers to oversee a trust that Benson had established in Texas for his daughter and grandchildren. That trust holds auto dealerships, a bank and real estate in Texas and is separate from the New Orleans case.