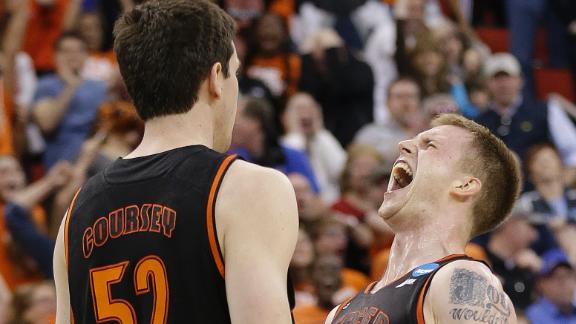 Roddy White responded Sunday to apparent backlash over his attempt to amend a Twitter bet with a follower over Friday's Duke-Mercer NCAA tournament game but the fan in question says he's fine with the wide receiver's response.

White told the fan last week that he would give him Atlanta Falcons season tickets on the 50-yard line if 14th-seeded Mercer beat third-seeded Duke. After Mercer upset Duke 78-71, the tweet ended up going viral.

- Roddy White (@roddywhiteTV) March 18, 2014After Duke's loss, White responded Friday to his followers that he would pay off the bet by giving the fan tickets to the Falcons' game this season vs. the Chicago Bears, not realizing that the fan was a Falcons fan and Mercer's nickname is also Bears.

- Roddy White (@roddywhiteTV) March 21, 2014Sunday morning, after apparently receiving criticism over his tweak to the bet, White told his followers to calm down.

Plus it's illegal to gamble in the NFL

- Roddy White (@roddywhiteTV) March 23, 2014However, while some of White's followers are upset, the follower involved in the bet said in a series of tweets Sunday that he's fine with the response.

I don't expect anything from @roddywhiteTV because it wasn't even a legit bet. I do not want to be a distraction to The Falcons organization

@roddywhiteTV Don't stress it! Go out and get on your grind and let's win a Super Bowl!