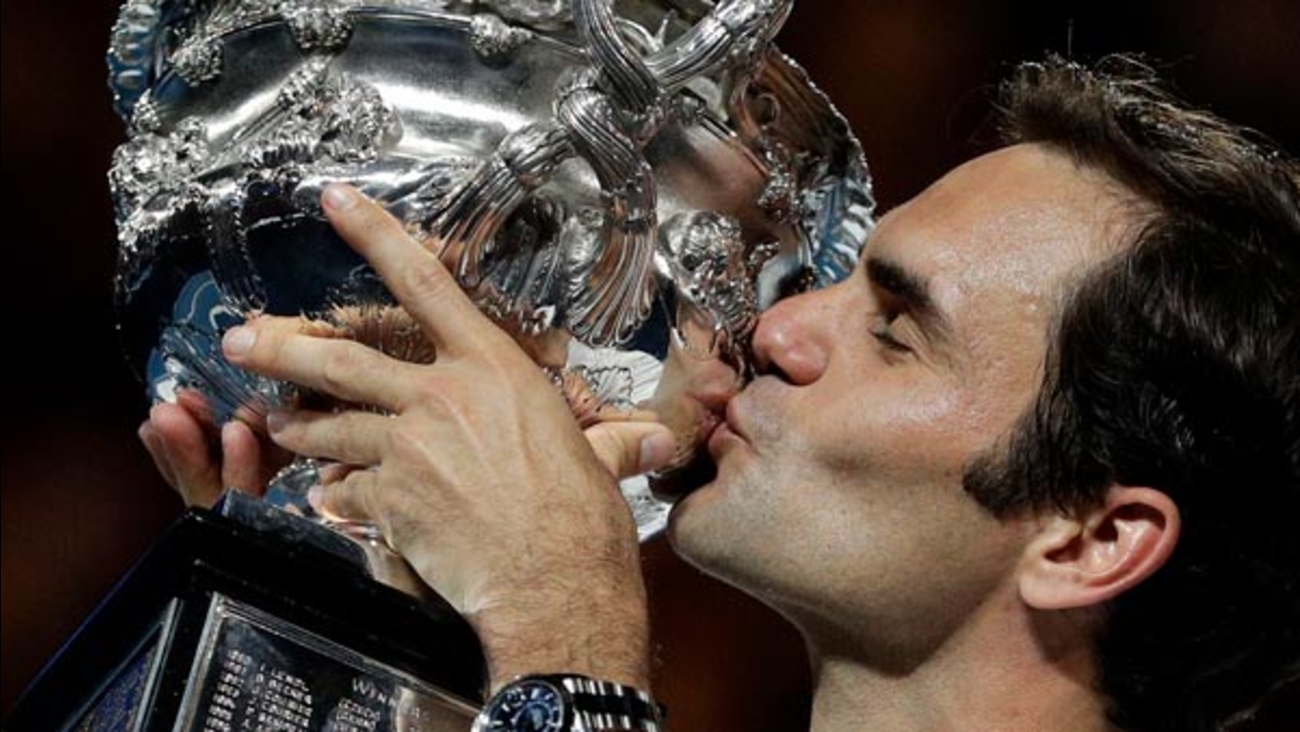 MELBOURNE, Australia -- Back where his career resurgence began with a drought-breaking triumph last year, Roger Federer cried as he lifted and kissed the Australian Open trophy for a sixth time and celebrated his 20th Grand Slam title.

Federer started Sunday's final with an intensity that stunned sixth-seeded Marin Cilic, then held his nerve in a tense, momentum-shifting match before winning 6-2, 6-7 (5), 6-3, 3-6, 6-1.

After going more than four years without winning a major title leading into last year's Australian Open, Federer has now won three of the last five.

"I'm so happy. It's unbelievable," Federer said, taking deep breaths and choking back tears. "Of course, winning is an absolute dream come true - the fairytale continues for us, for me, after the great year I had last year, its' incredible."

The great Rod Laver, who lends his name to the center court at Melbourne Park, was in the crowd taking photos to mark the occasion of Federer becoming the first man to win 20 majors.

Federer started to tear up at the end of the trophy ceremony as he thanked his team in the stands. "I love you guys. Thank you," he said. He then received a standing ovation as tears streamed down his face.

At the age of 36 years, 173 days, Federer became the second-oldest man to win a Grand Slam title in the Open era after Ken Rosewall, who won the 1972 Australian Open at 37.

"Big congratulations to Roger and his team - it's amazing what you guys do," Cilic said. "It was an amazing journey for me to come here to the final. I had a slight chance at the beginning of the fifth, but Roger played a great fifth set."

It was clear early on that the crowd would be heavily pro-Federer. The arena was filled with the red and white colors of the Swiss flag, with Federer supporters wearing Swiss flags on their shirts, hats, signs and faces. Looking ahead to a possible Federer victory, one fan held a sign reading, "The Big Two-Oh. Go Roger!"

Federer was quick off the mark, getting service breaks in the first and third games and forcing Cilic to go to his equipment bag for a new racket after just 12 points. Federer only conceded two points on his serve in the opening set, which lasted just 24 minutes and was played under a closed roof because of the heat outside.

But Cilic rallied in the second, getting his big forehand working and, after missing a set point on Federer's serve in the 10th game, leveled the match in the tiebreaker.

Cilic had two chances to break Federer's serve in the first game of the fifth set, but wasted them both with two unforced errors. He then double-faulted twice in the second game to drop his own serve, giving Federer the decisive lead in the set.

Federer had won eight of their previous nine matches, including last year's Wimbledon final. His only defeat was in the semifinals of the U.S. Open in 2014, where Cilic claimed his first major title.

The Swiss great wasn't about to lose this one. Federer increased his level again, breaking Cilic again in the sixth game and then closing out at love - his celebrations delayed slightly by an unsuccessful challenge from Cilic on match point. It was a similar end to his five-set win over Rafael Nadal here last year and, just like 12 months ago, the tears flowed.

The win wasn't entirely without some controversy with organizers deciding early to close the roof for the final, just as they had for the afternoon mixed doubles final when Mate Pavic and Gabriela Dabrowski beat Rohan Bopanna and Timea Babos for the title.

Former champions and commentators questioned the rationale, saying there'd been hotter days earlier in the tournament when the heat policy was not enacted.

Tournament referee Wayne McEwen can introduce the policy when the temperature reaches 40 degrees Celsius (104 Fahrenheit) and a measure called the wet-bulb globe temperature - which combines factors such as heat, humidity and breeze - reaches 32.5C (90.5F).

The temperature hit 38C (100F) an hour before the men's final and the tournament organizers issued a statement saying that the WGBT reading was 32.7C (91F) at that time.

"With no dramatic reduction forecast, the referee exercised his discretion and called for the roof to be closed," Tennis Australia said in a statement. "At no other time during the event this year has the WBGT reading reached the threshold."