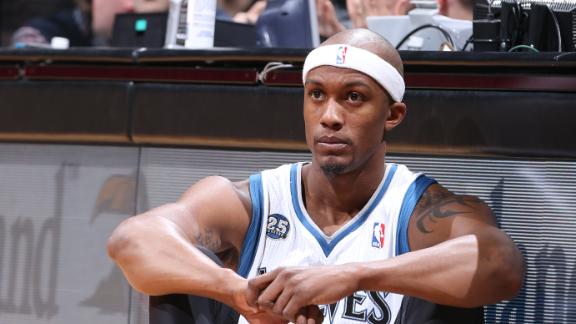 MINNEAPOLIS -- Minnesota Timberwolves forward Dante Cunningham was charged Friday with assault after being accused of choking his girlfriend during an argument.

A criminal complaint filed in Hennepin County District Court said his girlfriend told police they got into the argument early Thursday at his suburban Minneapolis home. The woman, who is not named in the complaint, told police he kicked down a locked bedroom door, grabbed her around the neck and slammed her against the wall, choking her for 15 to 20 seconds during which she could not breathe.

"Victim's eyes were watering and she felt like she was being strangled to death," the complaint alleges.

The woman told police he then dropped her, and she called 911.

According to the complaint, their relationship began last summer and they had been living together for eight months. Police said Thursday that she did not require medical treatment.

Cunningham was charged with one felony count of domestic assault by strangulation. The 26-year-old remained jailed Friday evening with bail set at $40,000. It wasn't clear if he had an attorney.

He was unable to join the Timberwolves when they left Thursday on a two-game road trip to Florida.

The team issued a statement Thursday saying it was gathering more information.

"The Minnesota Timberwolves organization takes the matter very seriously and does not condone the type of behavior that is associated with this situation," the statement read. "However, we need to let the legal process run its course, and will have further comment at the appropriate time."