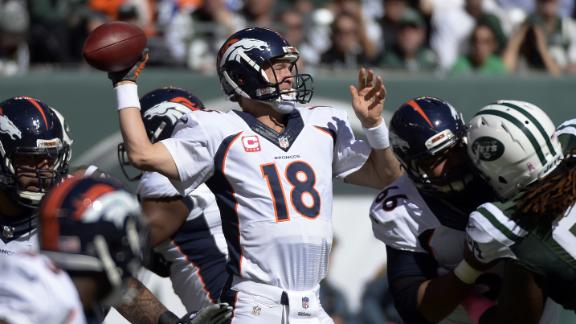 Broncos cornerback Aqib Talib picked off New York Jets quarterback Geno Smith and returned it 22 yards for a touchdown that covered the point spread in the Broncos' 31-17 win. Mayweather bet $815,000 on the Broncos to beat the Jets by more than 7.5 points. He laid -130 juice and collected $1.4 million from the CG Technology sports book at the M Resort.

Talib's pick-six electrified crowds at the sports books across Vegas and caused six- and seven-figure swings that went against the house. It also caused some damage inside the back office of the MGM Mirage sports book.

"The place went absolutely berserk," MGM's vice president of race and sports, Jay Rood, said. "I kicked a hole in the wall. I'll leave it as a reminder of my feelings toward Geno Smith."

The Broncos were the most popular bet in Vegas. The Westgate and Aliante sports books told ESPN approximately 95 percent of the bets on the game were on Denver.

The bad beats weren't over for the books, though. Arizona defensive back Rashad Johnson picked off Washington Redskins quarterback Kirk Cousins and returned it 28 yards for a touchdown to cover the spread in a 30-20 win.

"Those two interceptions cost us a half-a-million dollars," Rood said.

Don't feel too sorry for the books, though. They still won money on an eventful Sunday.

The Dallas Cowboys' upset of the Seattle Seahawks, coupled with the San Diego Chargers' failing to cover the spread against the Oakland Raiders, were big winners for the books and helped them overcome the tough beats.

"We were in a spot that we would have probably been up a million five after those games," Simbal said. "Instead, we were only up a third of that. Because of the Raiders covering and Cowboys winning, we ended up in pretty good shape today."