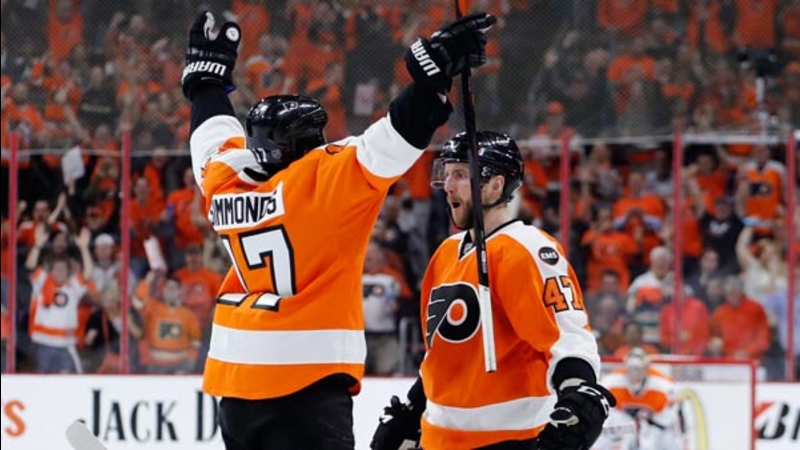 PHILADELPHIA (WPVI) -- Michal Neuvirth skated off the Flyers' ice to a roar he wanted to hear.

Only thunderous cheers came from the fans, not flying objects. With how Neuvirth played, he might have stopped them anyway.

Neuvirth had 31 saves in his first start of the playoff series, helping Philadelphia stave off a sweep with a 2-1 win over the Washington Capitals on Wednesday night.

"We talked about it, let's have some fun and enjoy the moment. We did," Neuvirth said.

The Capitals still lead the series 3-1 headed into Game 5 Friday night in Washington.

Shayne Gostisbehere and Andrew MacDonald each scored for the Flyers in a distraction-free game following Game 3's embarrassing end where fans pelted the ice with souvenir wristbands.

"The fans were a little bit better than last game," Flyers captain Claude Giroux said. "It's good to have them on our side again."

Outstanding play in the net helped the Flyers even more. Neuvirth was sensational in the third after T.J. Oshie scored early in the period to make it 2-1.

The Capitals still have never swept a best-of-seven playoff series.

Flyers rookie coach Dave Hakstol shuffled the lineup for the win-or-else game. He benched No. 1 goalie Steve Mason for Neuvirth and moved Brayden Schenn to the top line and demoted Jake Voracek.

Mason allowed five power-play goals, including four in a third period, in a 6-1 Game 3 loss. Mason's Game 2 gaffe that allowed Jason Chimera's 101-foot tip-in goal has been replayed on an endless blooper reel in Philly.

"He always was pretty clutch, so I'm sure he's going to be fine tonight," Voracek said.

He was clutch, indeed. His only misstep came when Oshie backhanded a rebound off Matt Niskanen's shot from the point just 2:38 into the third.

That was it for the Capitals.

"Every series is about getting the four. We need to get the four," coach Barry Trotz said. "The sooner you get the four, it gives you a couple opportunities to rest guys, heal guys (and get) a little mental break from the pressures of playoff hockey and a little more time to prepare."

The Flyers seemed like a new team from the start. Neuvirth stopped all 10 shots and the punchless top line finally broke through to give the Flyers a lead.

Giroux and Wayne Simmonds - 1-2 in team points this season - were each held without a goal or assist through the first three games. They both assisted on Gostisbehere's blast from the point for the 1-0 lead.

Gostisbehere's goal came on the power play, snapping the Flyers' 0 for 13 postseason skid.

Hakstol made all the right moves.

"We're not too worried about digging out of a 3-0 hole," he said. "We came here today to win a hockey game."

The game was marred by a scary hit that saw Flyers center Scott Laughton leave on a stretcher.

He was taken off the ice on a stretcher after he crashed into the boards late in the first. Washington defenseman John Carlson tangled with Laughton behind the Capitals' net. Laughton stumbled and his head and neck slammed into the back boards. He went down in a heap face-first and was immobile for several minutes. There was no penalty on the play.

"It's just one of those plays where we're kind of even and he tries to stick-handle through me and take it to the net," Carlson said. "I'm just trying to defend him."

MacDonald's goal on a one-timer in the second period gave the Flyers a 2-0 lead. MacDonald signed a $30 million, six-year contract with the Flyers in 2014, then slumped so badly that the 29-year-old defenseman was demoted this season to the AHL. He played just 28 games for the Flyers and 43 with the Lehigh Valley Phantoms.

Braden Holtby, who had had stopped 91 of 93 shots, started a day after he left practice with an apparent left leg injury after a collision with a teammate. He had 23 saves.

"We have to start better, manage the puck better and put some traffic in there," Capitals star Alex Ovechkin said.

Flyers have NOT been Swept in Playoff Series since 2011 pic.twitter.com/WA06byqYUD

#Flyers are 159-14 all-time when leading going into 3rd period of a #stanleycup playoff game pic.twitter.com/LCzY5JLNoF

The Flyers have only come back from a 3-0 playoff hole 1 time in team history (2010 vs Boston) #Flyers #PHIvsWSH pic.twitter.com/epemmy187X

20 minutes away from 1st win!!! pic.twitter.com/NbyxZqZv1c

Flyers have scored as many goals tonight in 1st 2 periods as rest of series combined!!! #flyers pic.twitter.com/DNvCuSfdH4

NOTES: NHL great Wayne Gretzky was at the game, as well as scores of former Flyers stars such as Chris Pronger, Simon Gagne and Kimmo Timonen. They are in Philadelphia for the Ed Snider celebration on Thursday. Snider founded the Flyers and served as their owner until his death on April 11. He died at 83 after a two-year battle with bladder cancer. The event is open to the public and doors open at 11:30 a.m. at the Wells Fargo Center. ... Capitals D Brooks Orpik sat out because of an upper-body injury. ... Gostisbehere turned 23 on Wednesday.